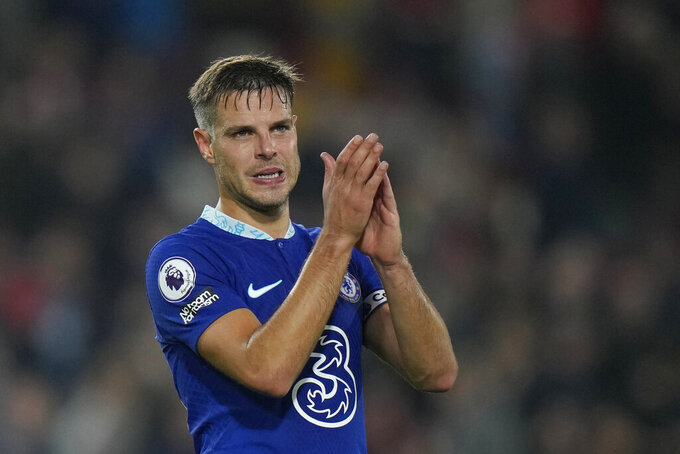 Alastair Grant, ASSOCIATED PRESS
FILE - Chelsea's Cesar Azpilicueta applauds fans at the end of the English Premier League soccer match between Brentford and Chelsea, at the Gtech Community stadium, in London, England, Oct. 19, 2022. Cesar Azpilicueta has won every major club trophy in his decade at Chelsea. Now the defender hopes he can finally have some success with Spain thanks to the mix of veteran wiles and young talent that it brings to the World Cup. (AP Photo/Alastair Grant, File)

DOHA, Qatar (AP) — César Azpilicueta is one of only six players with previous World Cup experience in Spain’s 26-man squad.

Several others, including teenagers Pedri González, Gavi Páez and Alejandro Balde, and 20-year-olds Ansu Fati, Yéremy Pino and Nico Williams, will be playing at the biggest soccer tournament in the world for the first time.

“I don’t know if we have a veteran team or a young one, each player has his role,” Azpilicueta said Saturday after Spain held its first practice session at its base camp at Qatar University. “People like me, we can share our experiences from having played at one or more World Cups and can contribute things that a player who is 18 or 19 years old can’t.”

Midfielder Sergio Busquets is the only remaining player from the group that led Spain to its sole World Cup title in 2010 in South Africa. Azpilicueta, a 33-year-old right back, first played at the 2014 tournament, when Spain was eliminated in the group stage.

Azpilicueta said he's impressed with both the “confidence” of players like the 18-year-old Gavi, who holds records for Spain’s youngest player and youngest scorer, and the big-game experience that they already have.

“What I am most surprised by is their daring, the way they go for the game and don’t get rattled,” Azpilicueta said. “Players are starting earlier now, we can see it in their maturity levels and how they understand the game. Some (like Pedri) already have experience of playing in a European Championship, a Nations League, and now at age 19 will play in a World Cup.”

Pedri, who excelled for Spain in last year's run to the semifinals of the European Championship, will likely start alongside Gavi and the 34-year-old Busquets in an all-Barcelona midfield. This will be Busquets' fourth World Cup.

Azpilicueta had made only six appearances with the national team before he started as Vicente del Bosque’s right back at the 2014 World Cup in Brazil, when Spain was the defending champion. But instead of helping the country continue a dominant run that also included European titles in 2008 and 2012, Spain was eliminated after a 5-1 thumping by the Netherlands and a 2-0 loss to Chile.

He only played nine minutes at Euro 2016, when Spain reached the round of 16, and he never left the bench at the 2018 World Cup in Russia when Spain lost at the same stage to the underdog host team.

But after not being included in Luis Enrique’s plans when he took over the team before Euro 2020, he worked his way back in. He made the squad for that pandemic-delayed tournament and played in four games as Spain fell one win short of reaching the final in London.

“In 2010 I was only a fan, and then in my two World Cups things did not go the way I would have liked. Now we have a third opportunity,” said Azpilicueta, who has made 44 appearances for the national team. “I hope it goes well."

Azpilicueta will offer Luis Enrique a solid, steady hand at right back, especially when Spain faces a potent attack. He will compete with Dani Carvajal and Marcos Llorente for playing time.

Qatar has been criticized for being the host of the tournament, mainly for its human rights record but also for forcing the World Cup to be played during the traditional European season to avoid the Middle Eastern heat.

Hector Bellerín, a Barcelona right back who did not make the national team, dedicated his acceptance speech for being named one of GQ Spain’s Men of the Year to denounce the choice of Qatar as the host country.

“Being here tonight means not being at the World Cup and with the national team. Not forming part of that saddens me. But, on the other hand, I am glad,” Bellerín said to applause in Madrid on Friday. “I don’t know if I could manage to enjoy the burden of 6,500 deaths in the process of construction for the World Cup.

“People from countries like Pakistan or Bangladesh, the majority men in their 30s and 40s who were only seeking dignified and respectable lives for themselves and their families. Soccer serves as a mirror for society, for its greed, its selfishness.”

As for the weather in Qatar, which is still warm even in November, Azpilicueta said it hasn't been a problem.

“Some sun and a bit of warmth?" the Chelsea player said. "I come from London, so I can’t complain.”