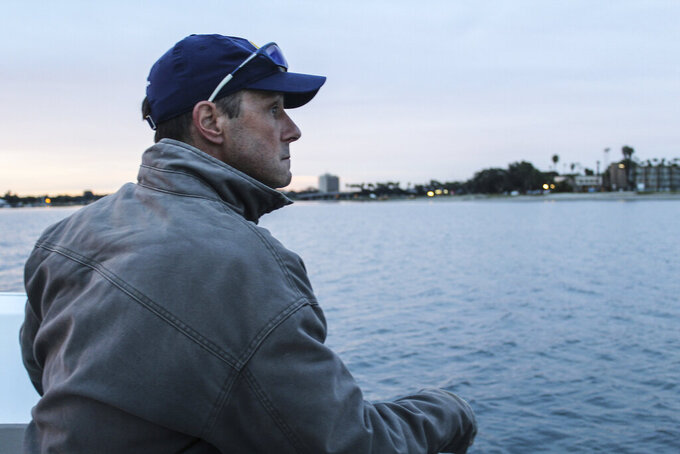 SAN FRANCISCO (AP) — Some of Geoff Bond’s rowers loved and appreciated his demanding style. They thrived on how the coach at the University of California-San Diego pushed them to the limit while preparing them to take on the real world.

But for others, Bond was a nightmare, with over-the-top intensity, an unpredictable temper and rage they abhorred. They say he regularly threatened to harm or kill team members. One heartbroken couple insists Bond's behavior was to blame for their son’s suicide.

Bond left his post earlier this year without any explanation from the school, and his employment status is unclear. In his wake, a debate now rages in college sports and athletics at every level: What constitutes bullying, and what is merely good, hard-nosed coaching that aims to get the most out of young adult athletes?

“There absolutely is a fine line between those two things, and it actually allows for somebody to behave in a more bullying manner under the guise of ‘I’m pushing you to be the best that you can be.’ And then the victim is kind of forced to accept that,” said Deidre Abrons, a licensed marriage and family psychotherapist in Oakland, California, with extensive trauma and PTSD experience.

Sports programs across the county are weighing whether such tough coaching styles have a place in a world where student-athletes demand more sensitive treatment and more individualized training. Athletes of this younger generation also wield greater personal power over their career paths, which can force coaches to accommodate them or risk losing top talent.

There is evidence that coaching has become less autocratic, less brutal — that Bond was just a throwback from the days when legends such as Bear Bryant pushed football players to the brink and Bobby Knight erupted in volcanic outbursts at his basketball teams.

These days, athletes are speaking up about their experiences on and off the playing field, regardless of whether they are on high-profile teams or in smaller, non-revenue sports. As transfer rules have eased, students have also acquired more freedom to change schools, along with the ability to capitalize financially on their fame.

Many coaches have changed too, tailoring their dealings with each athlete based on that person’s individual needs, rather than applying the one-size-fits-all approach of the past.

Bond's career in San Diego ended Jan. 13, when the school announced that he would no longer be coach, but it offered no details. Bond, who previously coached at the University of California-Berkeley and the University of Pennsylvania, has challenged his dismissal in court, and the legal battle is ongoing.

Some rowers said his rage regularly went beyond intense coaching.

“He never pushed or shoved anybody or made any physical contact, but he would get up in people’s faces. He’d threaten to kill people,” one ex-Penn rower said on condition of anonymity because he feared retribution in the tight-knit rowing community.

In a letter obtained by The Associated Press, a group of nine rowers from the 2016 Penn team wrote to more than 60 parents of fellow student-athletes expressing fears that the program was “unsafe” under Bond.

The rowers said Bond had “created an abusive environment by the repeated use of belittling nicknames and hostile language like, ‘Talk to me again, I swear I will f------ cap you. I will f------ kill you,’ and ‘I will break through you.’”

They also alleged that he showed disregard for the team's mental health and publicly shamed teammates who used Penn’s psychological services.

When reached for comment about Bond’s tenure, Penn said only that he stepped down at the end of his contract in 2019.

Some rowers who competed for him at UCSD have shared similar experiences, describing a culture in which Bond used crass and offensive language among other put-downs regularly uttered in front of athletes.

Through an attorney, several of Bond's former collegiate rowers from Cal, Penn and UCSD reached out to the AP in support of the coach.

Former Cal rower Vaclav Vochoska of the Czech Republic recalled how Bond checked on him one Thanksgiving when Vochoska was alone in the dorms. He calls his experience in Berkeley only "positive."

“My time with Geoff Bond was nothing but special,” Vochoska said by phone from Europe. “The challenge never came in a hurtful way ... It doesn't sound right he would be threatening anybody at practice.”

Gary Champagne, who rowed for Bond at Cal as a freshman in 2002-03, said via email: “I absolutely loved his style of coaching and feel it is a great fit for young college kids."

But the parents of Brian Lilly Jr. are adamant that their son was verbally abused by Bond, leading to his suicide in January 2021. Brenda and Brian Lilly Sr. filed a wrongful-death suit against Bond, alleging that the coach mistreated their son largely because he challenged Bond’s decision to allow a rower to remain on the team despite allegations of sexual assault against the athlete.

Bond’s defense said the coach hadn’t seen Lilly in person for the nine months prior to his suicide and that the coach reached out during the pandemic lockdown period to inquire whether Lilly would return to school in San Diego from the East Coast where he had been living.

A spokesman for UCSD, which is named in the suit, declined to comment, citing the pending litigation.

That the athletes spoke out at all represents a sea change in the balance of power between athletes and the coaches who once held almost unquestioned authority over their teams.

Now college athletes can use the NCAA transfer portal to change schools and teams if they are unhappy with their playing time or treatment. They can also make money in ways that were unimaginable until recently with new rules allowing compensation through endorsements and sponsorships. And with the rise of social media, student-athletes can share their opinions and experiences directly with the wider world.

Some coaches are struggling to adjust with athletes who are newly emboldened.

“It is making it a little more challenging," said Wayne Tinkle, Oregon State men’s basketball coach, referencing the flexibility that students have "to leave if things get tough or if you get pushed too hard, or if somebody’s telling you they can give you more.”

But Tinkle said any pressure on coaches to be educators, not autocrats, is a good thing: “We’ve got to look ourselves in the mirror and show these young men that the biggest part of our job is taking them from late adolescence into early adulthood.”