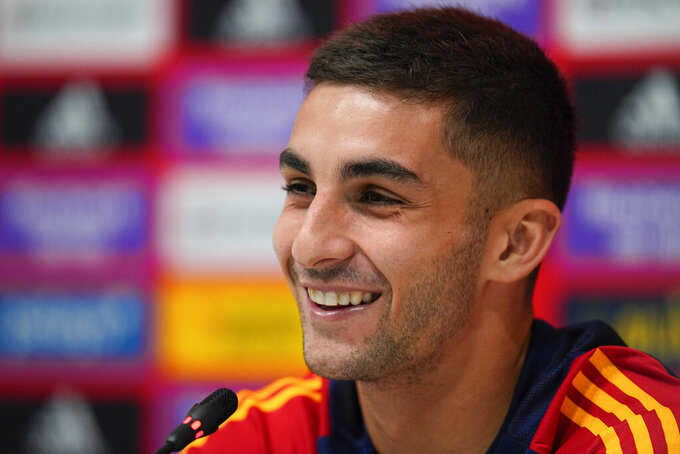 DOHA, Qatar (AP) — Luis Enrique is more than just a coach for Spain forward Ferran Torres. He is also the father of the Barcelona player's girlfriend — and that’s no problem for them at the World Cup.

Torres dates the 20-year-old daughter of Luis Enrique, Sira Martínez, and says he and the coach have done well separating work and family.

“The coach and I are being able to separate when we are family and when we are coach and player,” the 22-year-old Torres said Sunday in Qatar, where Spain will play in Group E.

He and Sira have not hidden their relationship, but the forward has not often spoken publicly about it.

“You have to deal with it naturally,” Torres said. “It is what it is, and we have been dealing with it very well.”

Luis Enrique brought up Torres’ relationship with his daughter in one of his appearances as a streamer on Twitch. When asked about which player he felt was the most similar to him when he used to play, Luis Enrique — a former midfielder for Spain's national team and for Barcelona — had a long pause and then said, laughing: “This one is very easy for me. It’s Ferran Torres. Because if not, my daughter will get me and cut my head off.”

Torres hinted he was watching the stream when Luis Enrique made the joke.

“I’m a fan of his streams. Every night we are waiting to watch him and we have a good time with it,” Torres said. “He jokes a lot. It was something that came up live, it was a joke.”

Torres is one of the many youngsters Luis Enrique picked for Spain's revamped squad. He hasn't played many minutes with Barcelona under coach Xavi Hernández, but started for Spain in the two Nations League matches in September. He also came off the bench in the World Cup warmup against Jordan last week.

Torres plays more on the sides but can also be used at the top of the attack at the striker position, where Luis Enrique only brought Álvaro Morata to his squad.

“We have eight forwards and that helps,” said Torres, who feels like good performances in Qatar may help his case at club level with Barcelona. “The World Cup may work as a trampoline for me and many other players."

Spain is trying to win a second World Cup title after lifting the trophy for the first time in 2010 in South Africa. The team's first match in Qatar is on Wednesday against Costa Rica. The team will then face Germany and Japan.