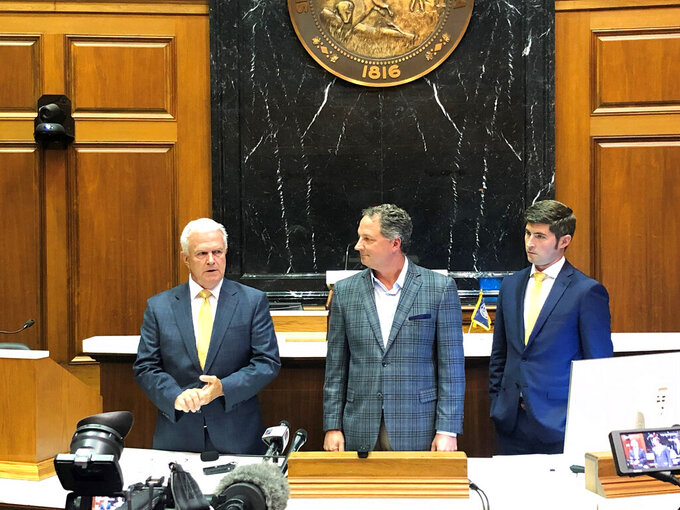 INDIANAPOLIS (AP) — Republican leaders defended their fast-track work to approve Indiana’s new congressional and legislative election districts over the next two weeks, pushing back Wednesday against critics who have argued that the public won’t have enough time to weigh in on the once-a-decade redistricting.

The Indiana House elections committee opened two days of public hearings on the redistricting plan a little more than 24 hours after the new congressional and Indiana House maps were posted online. Proposed new maps for the Republican-dominated state Senate won’t be made public until Tuesday.

Political analysts say the new maps are likely to preserve the 7-2 Republican control of Indiana’s congressional seats and protect the commanding 71-29 majority Republicans have in the state House.

Democrats and voting-rights groups argue the public will have little time to study and comment on the new maps ahead of the final votes for General Assembly approval expected on Oct. 1 — making Indiana one of the first states to complete redistricting work.

“We wanted to have maps that honored the goals and what we were trying to accomplish,” Huston said. “People are going to think what they want to think.”

The new Indiana House maps create six districts without incumbent legislators, Huston said. Three are in suburban Indianapolis and one is in Fort Wayne — areas that saw population growth over the past decade, while rural populations shrank. Forty-nine of Indiana’s 92 counties lost residents.

Six of the new districts have two Republican legislators living in them, although some of those lawmakers — most prominently House Ways and Means Committee Chairman Tim Brown of Crawfordsville — are not expected to seek reelection next year. Huston said no Democratic legislators were drawn out of their current districts.

House Republican Caucus Chairman Greg Steuerwald of Avon, who is sponsoring the redistricting bill, said the election district changes were driven by population changes and that he had not analyzed their political impact.

Steuerwald maintained that Republicans took into consideration public comment during nine hearings around the state last month. He pointed to complaints about Fort Wayne’s Allen County being divided into nine House districts, including five in which most people lived outside the county. The new map has five House districts fully within Allen County and only one crossing into another county.

Several people who testified Wednesday complained about a lack of time for the public to analyze the proposed districts.

Democratic Rep. Matt Pierce of Bloomington said even a few more days before hearings started would have allowed for better public input.

Democrats had braced for some districts they hold now to be targeted in the new maps. Pierce said it appeared that Republicans aimed to deal with population shifts in a way that preserved their two-thirds House supermajority that allows them to advance legislation even if the Democrats aren’t present.

“Perhaps there was a strategic decision made, `Well if we don’t throw Democrats in together, or eliminate a couple more of their seats, maybe that’ll lower the temperature a little bit during debate, maybe public won’t get quite as exercised about the process,'” Pierce said.

Republicans maintain the speedy work is needed so that county officials have as much time as possible to prepare for next year’s elections as the candidate filing period starts Jan. 5. The redistricting debate would have typically occurred as the regular legislative session ended in April, but the COVID-19 pandemic delayed the release of census data.

Huston said Republicans listened to statewide input and shared all the population data used for the redistricting work on a public website.

“Because of the uniqueness of these circumstances there has been more visibility than ever and that’s been a good thing,” Huston said.