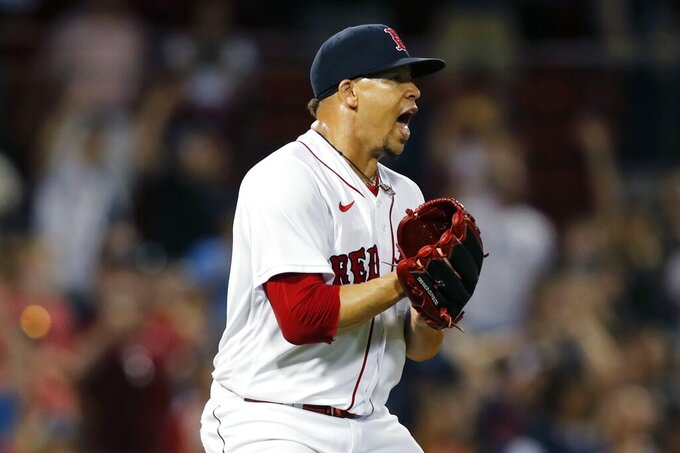 The Twins scored one in the sixth and four in the seventh to turn a 9-3 deficit into a one-run game. Even the added cushion from Kiké Hernandez’s eighth-inning, two-run homer didn’t seem very safe after closer — for now — Matt Barnes gave up a leadoff home run in the ninth and then walked the next two batters.

“It’s a bad time to start sucking,” said Barnes, who endangered a three-run lead in Tuesday night's 11-9 victory over Minnesota after blowing a two-run lead a night earlier. “But it’s about winning ballgames. Even with my struggles the last couple of nights, we won both ballgames.”

Hunter Renfroe homered twice, the second during a five-run fifth inning that gave Boston a six-run advantage, and the Red Sox held onto the lead and their wild-card chances with their third win in four games.

Alex Verdugo had three hits, and Renfroe drove in five runs with his 14th career multi-homer game to stake the Red Sox to a 9-3 lead. Jorge Polanco homered to help Minnesota get within one run before Hernández made it 11-8 in the eighth and Boston turned the game over to its All-Star closer.

One game after Barnes coughed up a 3-1 lead in a game Boston came back to win in 11 innings, he gave up Josh Donaldson's solo homer and left with runners on first and second without retiring a batter.

Ex-Twin Hansel Robles struck out Nick Gordon on a 3-2 fastball, then fanned Miguel Sanó before retiring Jake Cave on a soft liner to second for his 11th save — his first for the Red Sox.

Mitch Garver doubled and scored in the sixth before Polanco homered to chase Martín Pérez in the seventh. With runners on second and third, Hirokazu Sawamura struck Garver out and appeared to do the same with Gordon before substitute home plate umpire Phil Cuzzi called the celebrating pitcher back to the mound because the ball was tipped.

Gordon bounced the next pitch up the middle to make it 9-8. Sanó was out on a weak grounder back to the pitcher to end the inning.

Griffin Jax (3-2) allowed nine runs on seven hits and four walks in 4 2/3 innings, spoiling a streak in which he had picked up two straight quality starts — the first two of his career.

Travis Shaw, who won Monday’s game against Texas with a walk-off grand slam in the 11th inning, hit a solo homer in the third. In the fifth, Rafael Devers doubled in one run, Verdugo hit a two-run double and Renfroe hit one onto Lansdowne Street behind the Green Monster to make it 9-3.

Red Sox starter Tanner Houck got pulled with two outs and a man on second with Boston leading 4-3 in the fifth inning. Josh Taylor (1-0) relieved him and threw one pitch to retire Luis Arraez on a groundout.

Home plate umpire Tom Hallion took a foul ball off the top of his mask during Xander Bogaerts’ at-bat in the first inning. After a lengthy visit from the Red Sox trainer, he remained in the game. But After Bogaerts made an out, Hallion left the game.

Donaldson had a rare 400-foot single off the center field garage door in the third inning.

The Rangers third baseman, who was in the lineup at designated hitter while nursing a sore hamstring, lined a 3-1 pitch to straightaway center. It banged off the metal door the team uses to drive equipment onto the field before Verdugo picked it up and threw it to second in plenty of time to get Donaldson.

Twins: RHP Kenta Maeda will seek a second opinion on what the team is calling “right forearm tightness.” Manager Rocco Baldelli said there are scenarios in which Maeda will have season-ending surgery, but that it wasn’t certain. Also, OF Byron Buxton was scheduled to play back-to-back rehab games for Triple-A St. Paul Tuesday and Wednesday.