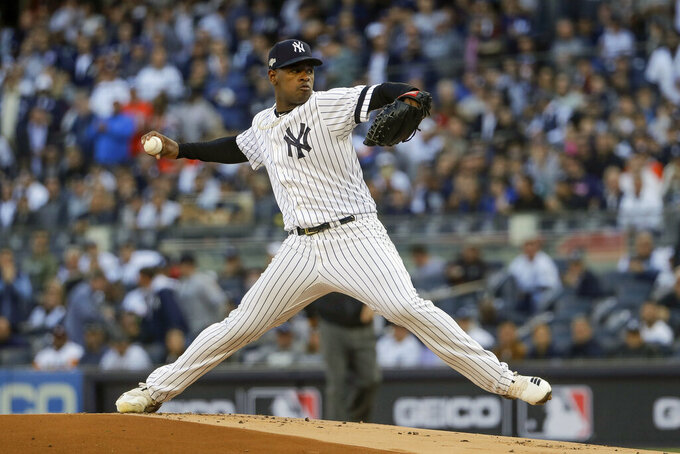 Frank Franklin II, ASSOCIATED PRESS
FILE - In this Oct. 15, 2019, file photoNew York Yankees starting pitcher Luis Severino delivers against the Houston Astros during the first inning of Game 3 of baseball's American League Championship Series in New York. Severino was activated by the New York Yankees before Monday's series opener against the Texas Rangers and is in position to make his first major league appearance in nearly two years. Yankees manager Aaron Boone says he plans to use Severino out of the bullpen. (AP Photo/Frank Franklin II, File)

NEW YORK (AP) — Pitcher Luis Severino was activated by the New York Yankees before Monday's series opener against Texas and is in position to make his first major league appearance in nearly two years.

“It will be like my first tenure here in 2015. It’ll be the same emotion," Severino said. "But after I throw the first pitch, I think everything is going to come back like I used to be.”

Yankees manager Aaron Boone plans to use the two-time All-Star out of the bullpen. New York began the day 1 1/2 games behind Toronto for the second AL wild-card spot.

“He could find himself in the highest-leverage situation or whatever and could evolve into a multi-inning role,” Boone said. “We feel like we got a really good pitcher that we got to add to the mix today.”

Severino's rehab was slowed when he injured his right groin on June 12 in his second minor league appearance, for Hudson Valley at Brooklyn. Severino returned to pitch for Somerset on Aug. 3 and 8, then was scratched from an Aug. 13 outing for Triple-A Scranton/Wilkes-Barre because of shoulder tightness.

“He’s worked on his changeup and I think adding kind of a cutter-and-a-slider-hybrid to his repertoire,” Boone said.

A 19-game winner in 2018, Severino signed a $40 million, four-year contract before the 2019 season. He was limited by shoulder soreness to three appearances in 2019, the first on Sept. 17 and the last on Sept. 28, plus a pair of postseason starts that Oct. 7 against Minnesota in the AL Division Series and Oct. 15 against Houston in the AL Championship Series.

“It’s been long enough,” Severino said. “Definitely be ready for any situation.”

Right-hander Sal Romano was released by the Yankees to open a roster spot.