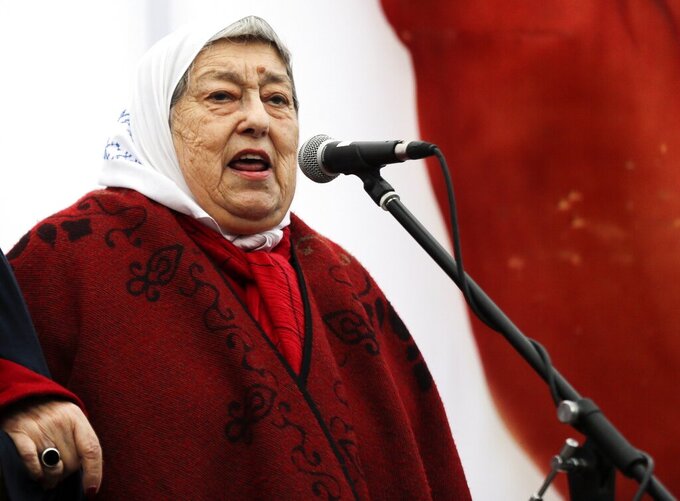 BUENOS AIRES, Argentina (AP) — Hebe de Bonafini, who became a human rights campaigner when her two sons were arrested and disappeared under Argentina's military dictatorship, died Sunday, her family and authorities reported. She was 93.

The death was confirmed by her only surviving child, Alejandra, who expressed thanks for expressions of support her mother had received while hospitalized in the city of La Plata. Local officials said she had suffered from unspecified chronic illnesses.

Vice President Cristina Fernández de Kirchner — a former president who had close ties with de Bonafini — posted a tweet calling her “a global symbol of the fight for human rights, pride of Argentina.”

Hebe María Pastor de Bonafini was one of the founders of the Association of Mothers of the Plaza de Mayo in May 1977, two years after the military seized power and began a brutal crackdown on suspected leftists.

She became president two years later and led the more radical of two factions of the organization until her death.

The Mothers initially demanded the return, alive, of their children — and later punishment of the military figures responsible for seizing and killing them, with no public word of their fates.

Widely honored for her human rights campaigns, she also was a controversial figure in later years for a radical opposition to U.S. governments she blamed for backing right-wing dictatorships, her involvement in partisan politics and for a corruption scandal involving her group's foundation.

De Bonafini was born in 1928 in the town of Ensenada outside the Argentine capital and at 18, she married a youth from her neighborhood, Humberto Alfredo Bonafini, and they had three children: Jorge, Raúl and Alejandra. Known to friends as Kika Pastor, her schooling stopped soon after primary school.

In Februrary 1977, soldiers seized her oldest son. A few months later, a second, Raúl, also was captured. Both had been members of leftist militant groups, one of them armed, de Bonafini later said.

As she made the rounds of hospitals, courthouses, police stations and morgues in search of one son, and later both, she ran into other women on the same mission.

Faced with stonewalling from officials, 14 of them began holding demonstrations at the Plaza de Mayo in front of the presidential residence to demand the appearance of their children.

It was a daring move at a time when the government prohibited meetings of more than three people. But they began gathering every Thursday, walking counterclockwise around a clocktower in the center of the plaza.

During a religious pilgrimage later that year, they began wrapping cloth diapers — symbolizing those once used by their missing children — around their heads, and white scarves became a symbol of the group.

The military government broke up early demonstrations. And it kidnapped and killed the first leader of the Mothers, Azucena Villaflor. But the group persisted.

Looking back 30 years after the founding of the group, de Bonafini recalled, “We could not imagine that the dictatorships was so murderous, perverse and criminal" and said she wanted to speak for "the children who were brilliant, cheerful, warriors, teachers, incredible, convinced revolutionaries,"

She said their spirits lived on;: “Nobody goes forever,” she said. “We are their voice, their gaze, their heart, their breath. We conquer death, dear children.”

The Mothers and other activist groups say that about 30,000 dissidents were disappeared during the dictatorship — a figure finally accepted by the current government. Earlier administrations had estimated up to 13,000.

Three years after the end of the dictatorship, the Mothers split into two factions in 1986, with de Bonafini leading the more radical organization seeking systematic political change while the others focused more on legal issues.

Her anger often caused controversy, as when — following the 2001 attacks on the Twin Towers in New York — she said, “I felt happiness. I am not going to be a hypocrite. It didn't pain me at all."

She established close ties in 2003 with the leftist government of Néstor Kirchner, who later helped revoke the amnesty laws that had protected soldiers accused of crimes against humanity during the dictatorship.

Her defense of Kirchner and his wife and successor, Cristina Fernández, sometimes led to friction with other human rights groups who had criticized some of the leftist administration's policies.

De Bonafini herself fell into a scandal in 2011 when prosecutors accused her of irregularities involving public funds given to a foundation created by the Mothers of the Plaza de Mayo to build low-cost housing. Other officials of the foundation were convicted and the case against her had not been fully settled.