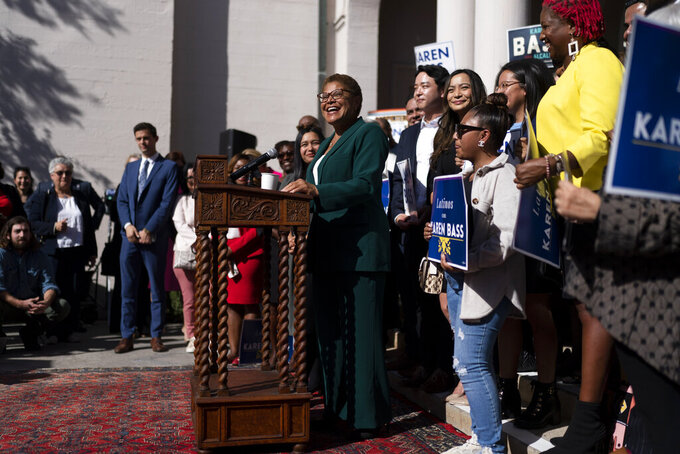 A day after her historic victory over billionaire developer Rick Caruso, Bass appeared before cheering supporters in the sun-soaked courtyard at the headquarters of a women's philanthropic group, where she let slip a bit of relief the contest was over.

“That was a tough campaign,” said Bass, a Democratic congresswoman.

She takes office Dec. 12 as the City Council faces a racism scandal that led to the resignation of its former president and calls for the resignation of two more members. More than 40,000 people are homeless, and there is widespread anxiety over crime that has ranged from daytime robberies on city sidewalks to smash-and-grab thefts at luxury stores.

Trash-strewn homeless encampments and rusty RVs can be found in virtually every neighborhood in the nation's second-largest city.

Flashing a beaming smile, Bass struck a tone of unity, with a multi-ethnic crowd of staffers and supporters arrayed behind her that broke into chants of “Karen! Karen!”

“No matter who you voted for, no matter who you are or where you live, I will be a mayor for you,” she said, saying she was eager to win the trust of those who supported her rival, Caruso.

“The crisis we face affects us all, and all of us must be part of the solution,” she added.

In a seven-minute speech long on optimism and light on specifics, Bass echoed her main themes from the campaign — getting homeless people off the streets and into shelters, reversing spiking crime rates and developing housing that working-class families can afford.

She describes herself as a coalition builder who will mobilize “all of the resources, all of the skills, the knowledge, the talent of the city.”

She will replace beleaguered Democrat Eric Garcetti, who will conclude two bumpy terms with his nomination to become U.S. ambassador to India stalled in the Senate — apparently over sexual misconduct allegations against a former top Garcetti adviser.

Bass — a former state Assembly speaker who was on President Joe Biden’s short list for vice president — overcame more than $100 million in spending by Caruso’s campaign while arguing she was the better pick to heal a troubled city of nearly 4 million.

Caruso, a former Republican who became a Democrat shortly before entering the race, had represented a turn to the political right. He argued that Bass and other longtime politicians were responsible for leading the city into multiple crises.

“We’re going to solve homelessness. We’re going to prevent and respond urgently to crime. And Los Angeles will no longer be unaffordable for working families,” she said.