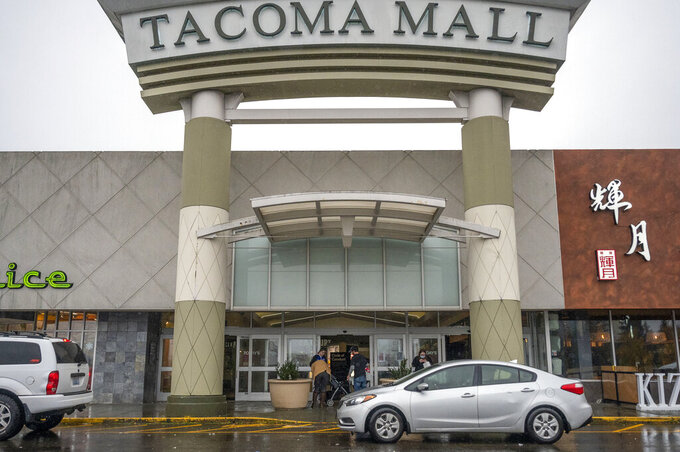 Pete Caster, ASSOCIATED PRESS
People walk into the north entrance of the Tacoma Mall, Saturday, Nov. 27, 2021, in Tacoma, Wash. A day earlier, multiple shots were fired inside the mall. One person was injured in the shooting. (Pete Caster/The News Tribune via AP)

TACOMA, Wash. (AP) — Police in Washington state on Saturday were investigating a shooting at a shopping mall that left one person seriously wounded and sent hundreds of Black Friday shoppers fleeing for exits or hiding in stores.

As of Saturday afternoon, no arrests had been reported in the previous night's shooting at the Tacoma Mall, south of Seattle.

The shooting began just after 7 p.m. Friday near the mall's food court. Officer Gary Wurges, a spokesperson for the Tacoma Police Department, said two off duty officers working at the mall quickly called in that shots had been fired.

One person, a male, was injured in the shooting and taken to a hospital for treatment of serious injuries. He was in stable condition.

Seattle television station KOMO reported that officers working in the mall saw a small group get into a dispute that escalated with gunfire.

As the mall went into lockdown, shoppers left inside sheltered in place or hid inside stores.

“We were about to get up and I hear about six shots or something,” Daisey Dockter, who was finishing a meal with her aunt and uncle when gunfire broke out, told KOMO. “We all just start running toward the door. It’s a huge mob of people. Everyone’s kind of pushing.”

Fredrick Hoskins was shopping with his daughter when he heard gunfire.

The Tacoma Mall is Tacoma's largest shopping mall, with more than 100 stores.