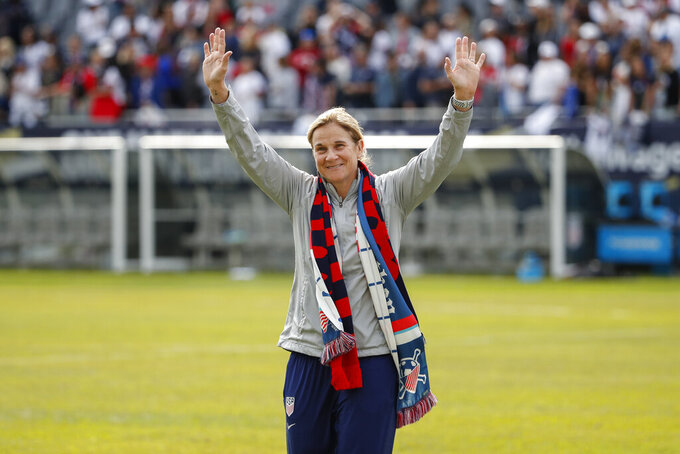 LONDON (AP) — Since capping three decades coaching by lifting a second World Cup with the American women, Jill Ellis has taken time to reflect and embark on a different path, with new career challenges.

“I’m not saying I would never go back to the sidelines,” Ellis said in an interview with The Associated Press. “But I feel a bigger purpose.”

Advice given by the head of a university sports project— “be a voice, be visible, build a community” — led to Ellis taking on the role of president of a National Women’s Soccer League expansion team with the San Diego Wave debuting next year. It also saw Ellis accept a leadership role from FIFA to explore a transformation of the women’s game.

The centerpiece of that project is the idea to double the frequency of World Cups — to play the finals of each event every two years. It was a vision first floated during the 2019 tournament in France as Ellis was winning her second title, with little immediate dissent.

“My hope is that the people within women’s football aren’t influenced by the decisions on the men’s side,” Ellis said after a meeting in London of the FIFA technical advisory group she leads. “My hope is we’re not seeing the politics of it on the men’s side, we’re looking at what is actually best for our game.”

UEFA, the governing body overseeing European football, has even threatened to boycott World Cups if FIFA gains support more widely to implement the restructuring of the sport.

“Let’s just put politics aside right now, and let’s look at what actually affects and changes lives,” Ellis said. “What’s going to really grow our sport? And I think my job is not to look at it with one region, it’s to look at it around the world.”

Concepts for biennial World Cups for men and women have become intertwined despite differences.

“So many countries around the world don’t have organized (women’s) leagues and infrastructure, so the touchpoint is the national team,” Ellis said. “Still the biggest driver for women’s football are ... the international tournaments and the national teams.”

It’s why, in the wake of her first World Cup win in 2015, Ellis convinced the U.S. Soccer Federation to create their own tournament, with the She Believes Cup starting in 2016.

“One of the things I looked at is in the four-year footprint between World Cups, and we’ve got one major event and that was the Olympics,” Ellis said. “And so how was I going to get my players used to the idea of competing and getting on a podium? And so I actually went to my bosses and was like, ‘We need to create a tournament other than outside just a friendly where I’m managing playing time and minutes and points. So it prepares me for a world championship, but it also prepares our players in how to manage the rhythm of a tournament.’”

That is particularly necessary when qualifying for World Cups is such a breeze for teams like the United States.

Opponents being steamrolled has been a hallmark of qualifying in Europe, with few competitive games for the elite highlighted by England scoring 32 goals without reply in its opening four games on the path to the 2023 tournament.

“It’s not just about a biennial World Cup,” Ellis said. “We’re looking at creating a reworked pathway for qualifiers so you don’t see the scores that you’ve seen most recently here in Europe. Nobody benefits when it’s 10-0 either way. It doesn’t grow our sport.”

As she consults across the world, Ellis also points to Hong Kong being out of contention after playing two qualifiers.

“Football in their country could shut down,” Ellis said. “How can we create more events, more opportunities for a country to continue to develop? Do they now go to a pathway to maybe a different event, different tournament?”

But leading women’s leagues — including in England, Germany and Italy — say more World Cups would be detrimental to their growth by saturating the sponsorship opportunities and they claim the calendar cannot fit in another tournament. England, though, has created its own four-team tournament in February in the buildup to hosting the European Championship in July.

“What becomes challenging is that people become very territorial about their own piece of the landscape,” Ellis said. “My job is to try and say, ‘Hey, there’s enough of the landscape for all of us, but let’s see how we can grow the game.’ If the game grows globally, I think everyone wins."

Ellis must also, though, overcome opposition from the International Olympic Committee, which is concerned about the strain on player welfare, additional men’s tournaments overshadowing women’s events and clashes with other sports trying to avoid being eclipsed by football.

“We’re not front and center enough," Ellis said. "We’re not on the television enough. So putting us there more, it’s not about cannibalizing each other. It’s about we’re trying to make space for female sport, period.”

FIFA's endgame is not certain with a vote on biennial World Cups no longer planned for December.