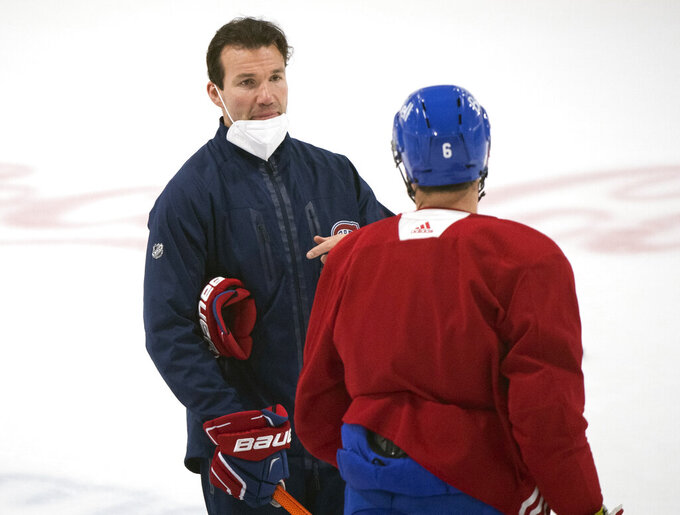 Graham Hughes, ASSOCIATED PRESS
FILE- Montreal Canadiens interim head coach Luke Richardson, left, talks with captain Shea Weber during NHL hockey practice in Brossard, Quebec, on June 27, 2021. The Canadiens take on the Tampa Bay Lightning in the NHL hockey Stanley Cup finals beginning Monday in Tampa, Fla. The Chicago Blackhawks are nearing a deal with Richardson to become their next coach, according to a person familiar with the talks who spoke to The Associated Press on Friday, June 24, 2022, on condition of anonymity because the deal had not been completed. (Graham Hughes/The Canadian Press via AP)

CHICAGO (AP) — Luke Richardson is the new coach of the Chicago Blackhawks, stepping into a tricky rebuilding process for one of the NHL's marquee franchises.

General manager Kyle Davidson announced the move on Monday. Richardson replaces Derek King, who finished the season as the interim coach after Jeremy Colliton was fired on Nov. 6.

“Luke shares our vision and goals for the future, and he will have an opportunity to build an environment and culture of high performance, hard work and high accountability," Davidson said in a release.

“I am honored to be trusted with this opportunity to coach an Original Six franchise like the Chicago Blackhawks,” Richardson said in the team announcement.

"I plan to create an environment of trust with our team. With trust, relationships will form and grow, thus allowing everyone to blossom and execute their role. My philosophy is to be better today than we were yesterday and, to achieve that, we will need commitment and consistency.”

Richardson retired during the 2008-09 season and joined Ottawa’s coaching staff. He was the head coach for the Senators’ AHL affiliate from 2012 to 2016.

Richardson, a native of Ottawa, Ontario, was an assistant on Montreal’s coaching staff for the previous four seasons. When Dominique Ducharme was diagnosed with COVID-19 during the 2021 playoffs, Richardson took over as coach for six games and helped lead the Canadiens to their first Stanley Cup Final since 1993.

Chicago won the Stanley Cup in 2010, 2013 and 2015, but it has fallen on hard times in recent years. It began this past season with playoff aspirations but stumbled to a 1-9-2 start on its way to a 28-42-12 record and seventh-place finish in the Central Division.

Longtime general manager Stan Bowman resigned in October in the wake of a report by an outside law firm that found the organization mishandled allegations that an assistant coach sexually assaulted a player during the team’s Stanley Cup run in 2010.

Davidson was elevated to the interim job before officially taking over on March 1. Norm Maciver joined the front office as an associate GM in March, and Jeff Greenberg was hired for the same role in April.

Richardson's first team in Chicago could have a dramatic new look compared to the one that finished last season. There are major questions at goaltender and along the lines, which could lose as many as three high-profile stars if the team decides to trade Patrick Kane, Alex DeBrincat and Jonathan Toews for more long-term assets.

But first up for Richardson likely will be his coaching staff. King, who coached the Blackhawks to a 27-33-10 record, is well-regarded within the organization and could stay on as an assistant.