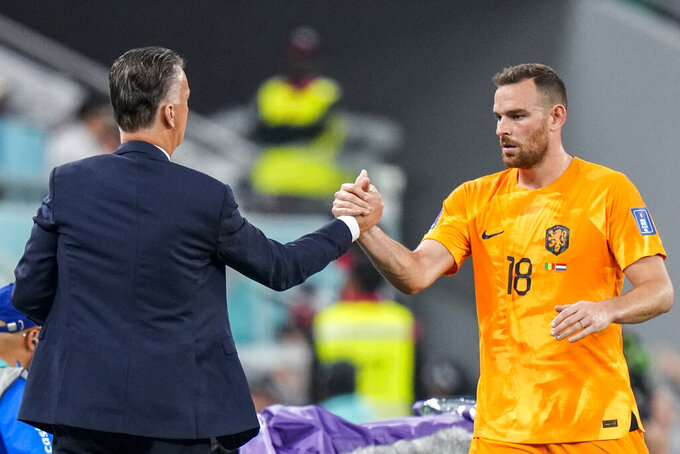 Luca Bruno, ASSOCIATED PRESS
Head coach Louis van Gaal of the Netherlands, left, shakes hands with his player Vincent Janssen of the Netherlands after being substituted during the World Cup, group A soccer match between Senegal and Netherlands at the Al Thumama Stadium in Doha, Qatar, Monday, Nov. 21, 2022. (AP Photo/Luca Bruno)

DOHA, Qatar (AP) — This year's World Cup wasn't part of the plan for Louis van Gaal. In fact, it was a major inconvenience.

He was retired when the Dutch soccer federation asked him last year to coach the national team for a third time. He was days away from turning 70. And he was also being treated for aggressive prostate cancer.

He still took the job.

“Because, simply, no one else was available at that time,” Van Gaal said.

So started the final assignment for one of soccer's most successful coaches, a man who has taken charge of and won trophies with Ajax, Barcelona, Bayern Munich and Manchester United and who has now extended his coaching career past 30 years by answering his country's call for the World Cup in Qatar.

Van Gaal may have initially stepped up more out of a sense of duty than any burning personal ambition to get back into the game. It's still opened up one more chance to win the big prize for Netherlands, which has lost three World Cup finals and went out in the semifinals in 2014 in a penalty shootout when Van Gaal was coach the last time.

The current team beat Senegal 2-0 in its World Cup opener on Monday, giving Van Gaal a 38th win as Dutch coach, a national record and another indicator of his pedigree.

Might that milestone be the start of a fairytale run through this World Cup for the man they call the Iron Tulip?

Maybe, but if it is to be a glorious final chapter for Van Gaal the coach, who has said he will definitely retire after this World Cup, it will be no fairytale. It'll rather be reward for a lot of hard work if Van Gaal's reputation as one of the sternest disciplinarians and most intense men in the game still holds, even after a five-year retirement and a health scare as serious as cancer.

Van Gaal smirked, just slightly, when his reputation was raised again at this World Cup. It was suggested to him that he'd been “angry” for an entire spell as coach of Barcelona earlier in his career, for example. It was surely time to mellow a little.

“I never changed. I never changed as a person,” Van Gaal said. "Perhaps I may have gained some experience. There was the conclusion that some things could be done different. But at the end of the day I have never changed over the course of my career.”

And he doesn't expect to now, even if he's 71 and the oldest coach at this World Cup. His fierce recent criticism of giving the World Cup to Qatar is proof of that.

His current players have no problem with that character, which captain Virgil van Dijk referred to as “direct” although Van Gaal is sometimes angry and almost always stern.

Added forward Vincent Janssen: “He always knows how to motivate us.”

Van Gaal's own dedication to this World Cup campaign has been clear.

He gave up his retirement — no doubt partly spent at his vacation home in Portugal's Algarve region — to guide a new generation of Dutch players when it wasn't something he's really set his sights on doing. He coached for a little while from a wheelchair last year after falling off his bike at a training camp and breaking a bone in his hip. He wouldn't take any time off.

And then there's the cancer.

Although he was first diagnosed with it in 2020, Van Gaal didn't immediately tell his players when he was appointed coach in August 2021, thinking the details of his disease and the grueling treatment he was undergoing while coaching them would be a distraction. He put the team first.

He finally announced he had cancer, and was hopefully on the way to beating it, earlier this year.

“When the news came out, it was a shock for us,” Van Dijk said. “It was tough ... but we wanted to be there for him. And we will definitely go the extra yards knowing also that this is the last World Cup for him."