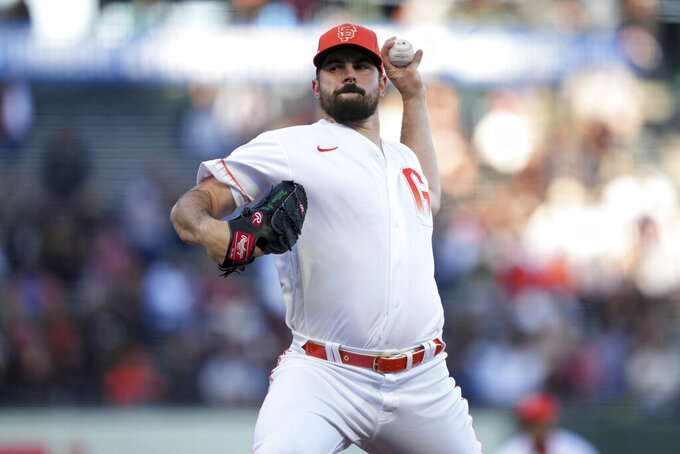 SAN FRANCISCO (AP) — Mike Yastrzemski briefly lost the line drive in the lights, but the right fielder realized he needed to scurry back because the ball had gotten over his head and he would have to jump.

So he closed his eyes, leapt, and somehow made the catch.

“Kind of just hoping it went in my glove,” Yastrzemski said.

That robbed slugger Miguel Cabrera of a likely extra-base hit, and it certainly mattered in a one-run game.

Yastrzemski hit a two-run single and made a terrific throw as well to go with his defensive gem, and the San Francisco Giants held off the Detroit Tigers 4-3 on Tuesday night.

“Sometimes it takes just one little moment where you see somebody give a little bit extra to kind of kick you back into gear. Especially when things aren't going your way, it's hard to really stay in that mindset,” Yastrzemski said. “So having a little kick in the rear end from yourself because you see someone else giving that effort can sometimes be contagious.”

Giants lefty Carlos Rodón (7-4) allowed one run and seven hits in six innings with four strikeouts and no walks. He hoped to pitch another inning before the nail on his middle finger split and wouldn't allow him to keep going.

Rodón has permitted just two runs over his last 27 innings.

“It definitely makes it easier when the boys are making plays like that,” he said.

Yastrzemski's leaping catch on the run in right field in the eighth robbed Cabrera, helping San Francisco improve to 7-2 in interleague play.

Dominic Leone had walked just six batters over his first 29 appearances before issuing three free passes and giving up Willi Castro's RBI single with two outs in the eighth. Camilo Doval relieved and struck out Jonathan Schoop, then finished for his 12th save.

Doval got Javier Báez to ground into a game-ending double play, with the call at first base upheld after a replay review.

Cabrera got the Tigers on the board with an RBI single in the sixth.

Longoria hit a two-run single in the first off Tarik Skubal (5-6). The lefty was done after 4 2/3 innings and hasn't gone more than five innings in four straight outings. A native of the East Bay suburb Hayward, Skubal yielded three runs and four hits and lost his fourth consecutive start.

This marks the Tigers' first trip to San Francisco since being swept by the Giants in the 2012 World Series, and their first visit for a regular-season series since 2008.

Tigers rookie Spencer Torkelson remembers being in the stands cheering when San Francisco clinched the NL Championship Series in 2012 on the way to its second World Series crown in three years. Marco Scutaro secured a popup to end it and smiled as the rain poured down when the Giants eliminated St. Louis.

“It was just a really cool atmosphere,” Torkelson said. “I went to a lot of Giants games but that was one of the more memorable ones.”

The 22-year-old Torkelson grew up in the wine country North Bay city of Petaluma, where his preschool teacher painted a mural of then-Pac Bell Park on his bedroom wall. He expected some 500 supporters to be in the stands cheering him in his homecoming — including immediate family like his parents, brother, grandma and uncle.

The top pick in the 2020 amateur draft out of Arizona State, he already had a homecoming in Phoenix over the weekend when Detroit played the Diamondbacks.

Tigers: RHP Miguel Pineda, working back from a broken middle finger on his pitching hand that has sidelined him since May 15, will throw a bullpen at Triple-A Toledo on Wednesday and could be in line to start for the Tigers as soon as Friday at home against Kansas City. ... OF Austin Meadows returned from COVID-19 but is still dealing with strains in both Achilles tendons the Tigers hope won't last long. “Now we wait for him to heal,” manager A.J. Hinch said.

Giants: Kapler is confident SS Brandon Crawford — placed on the 10-day injured list Sunday with left knee inflammation — will be in far better health for the stretch run after this stretch of time off to get his body right. “Every day's going to be a little bit better. We have a game plan now to get him back to full health and full explosiveness and with a clear head,” Kapler said. “We're excited about what he can bring when he gets back to the club.”