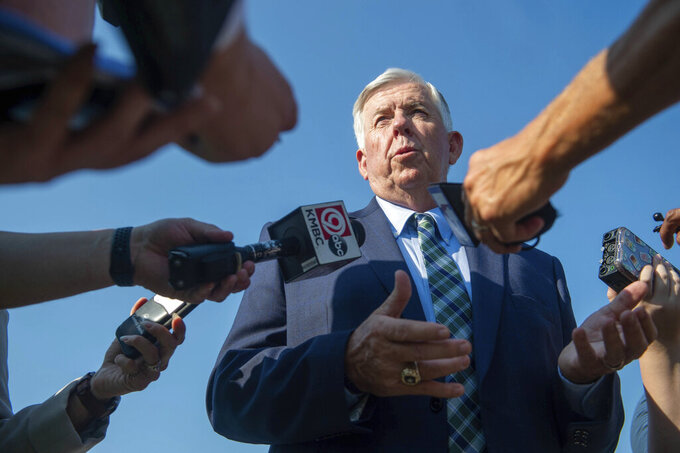 The analysis was first reported Wednesday by The Missouri Independent and the Documenting COVID-19 project at The Brown Institute for Media Innovation following an open-records request.

Parson's office asked the health department for information on the impact of mask mandates on infections, according to emails obtained in the request.

In response, the agency last month compared infection rates in urban centers, where mask mandates were in place, with rural areas between April and November.

The data shows that cities with mask mandates saw fewer infections and deaths across the board.

“There are ‘lots’ of variables that must be considered before we can definitively assess the impact of wearing a mask (or not wearing a mask) in Missouri before and during the primary Delta period,” Department of Health and Senior Services Director Donald Kauerauf said in a November email.

“However, I think we can say with great confidence reviewing the public health literature and then looking at the results in your study that communities where masks were required had a lower positivity rate per 100,000 and experienced lower death rates.”

Parson on Thursday responded to The Missouri Independent's report with a scathing 12-part Twitter thread attacking the reporter. Parson described the article as “purposefully misleading” and said it left out important context.

Parson spokeswoman Kelli Jones said in an email Friday that “no time or research was put into the data to draw any valid conclusions.”

Parson tweeted that the data does “not account for any outside variables, such as health care access, testing rates, and especially vaccination rates for each location.”

He added that mask mandates “do not work and can have collateral health consequences.”

It's unclear what prompted the Governor's Office to request the analysis and whether there was any discussion of releasing the information publicly. Jones didn't address those questions when asked by The Associated Press on Friday.

The analysis and Parson's aggressive public criticism of the Independent's reporting comes amid longstanding political division over the COVID-19 health crisis, both nationally and in Missouri.

Parson has refused to impose mask mandates throughout the pandemic. On Thursday, he tweeted that he does not “support government issued mask mandates that infringe on our personal liberties.”

“I have consistently said that I am not anti-mask; I am anti-mask mandate,” he tweeted.

Several Republican state lawmakers have also filed bills to shield Missourians from vaccination requirements ahead of the January legislative session.