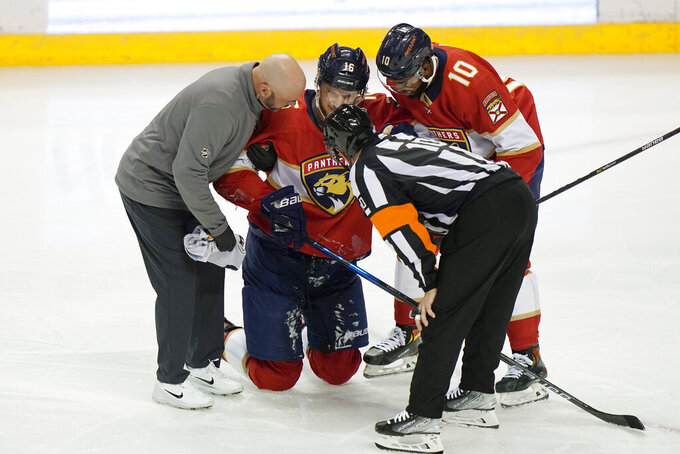 Wilfredo Lee, ASSOCIATED PRESS
Florida Panthers center Aleksander Barkov (16) is helped off the ice after a play during the second period of an NHL hockey game against the New York Islanders, Tuesday, Nov. 16, 2021, in Sunrise, Fla. (AP Photo/Wilfredo Lee)

SUNRISE, Fla. (AP) — Aleksander Barkov is hurt, and the Florida Panthers are relieved it's not as bad as initially feared.

Barkov will be week-to-week with a knee injury but will not need surgery, Panthers interim coach Andrew Brunette revealed Wednesday.

“It's the best-case scenario," Brunette said. “Could have been worse. We'll deal with it as we go."

Barkov was injured in a knee-to-knee collision with Scott Mayfield of the New York Islanders in the second period of their game Tuesday night, won 6-1 by Florida. Mayfield was called for a five-minute major penalty and a game misconduct.

The Panthers' captain and leading scorer remained down on the ice for a few moments, then was helped to the locker room and seemed unable to put any weight on his left leg. But teammates said he was moving around a bit after the game, and tests on Wednesday ruled out major damage.

The Islanders said they didn't believe Mayfield's hit was a dirty play, and Brunette agreed.

“I think it was very unfortunate," Brunette said. “Little bit reckless, but he was just trying to finish his check."

The exact nature of Barkov's injury was not revealed. Barkov leads the Panthers with nine goals and 17 points, a major factor in Florida's 11-2-3 start to the season — the second-best record in the NHL in terms of point percentage, behind only Carolina's 12-2-0 mark entering Wednesday.

“Everybody knows he’s a big part of the team and everybody knows they need to step up and do their best,” Panthers forward Anton Lundell said.

It's the latest in a series of major challenges already for Florida this season.

The Panthers were rolling along at 7-0-0 when Joel Quenneville had to resign because of his involvement in how the Chicago Blackhawks did not adequately respond to allegations of sexual abuse and harassment by a player against another coach in that organization in 2010, when Quenneville was the head coach there. Brunette took over as the interim coach.

Florida has also dealt with a number of injuries already this season, and now Barkov will miss time. The Panthers are back on the ice Thursday against New Jersey, which may mark the return of center Joe Thornton from injury.

“Barky’s irreplaceable, as we all know, but we have guys who can step up,” Brunette said. “We definitely have some guys that can be first-line centers in this league. We’re very fortunate to have the depth we have in the middle of the ice.”