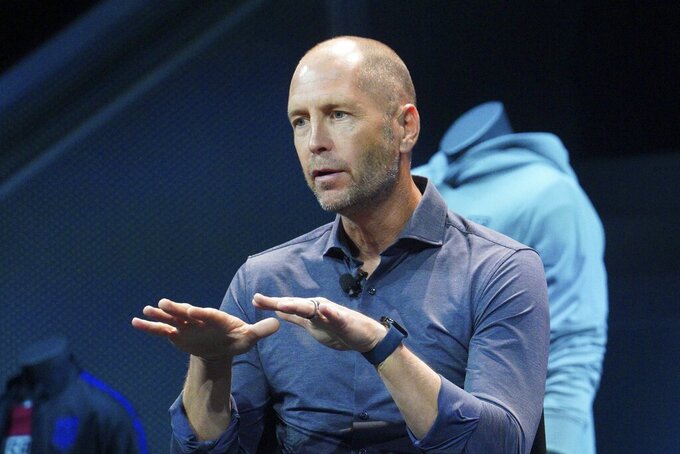 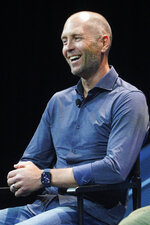 NEW YORK (AP) — With Christian Pulisic stuck on Chelsea’s bench this season, U.S. coach Gregg Berhalter predicts his biggest star will get back into the English club’s starting lineup.

“I’m a guy that bets on Christian just because I’ve seen it before,” Berhalter said Wednesday after an event to promote Nike’s World Cup jersey launch on Sept. 15. “He is not counted on in a way that he’d like to, and he gets on the field and he proves everyone wrong and he ends up playing. I mean that’s what he’s been doing. So I tend to believe that’s going to happen. And I think his mind is n a good spot and I think he’s going to fight for it because that’s the type of guy he is.”

The 23-year-old midfielder, in his fourth season with Chelsea, has been used as a second-half substitute by manaer Thomas Tuchel in each of the team’s first five matches, limited from seven to 27 minutes. He hasn’t scored.

Less than three months before Berhalter selects his 26-man roster for the Americans’ World Cup opener against Wales on Sept. 21, several players in his potential player pool of 38-to-40 are on the move.

Forward Ricardo Pepi, scoreless in his last 29 games for club and country, was loaned to Groningen of the Netherlands’ Eredivisie for the rest of the season on Wednesday by the Bundesliga’s Augsburg.

Sergiño Dest, the top American right back, was in the process of joining AC Milan after Barcelona coach Xavi Hernández didn’t allow the 21-year-old defender to dress for the club’s first three La Liga matches.

“To go from Barcelona to AC Milan is not bad, right?” Berhalter said. “Serie A is a competitive league. You got to defend really well in the Serie A, and it’s going to help him. It’s not nice when you’re told that you don’t have a spot in the group. And Sergiño is a guy that I know believes in himself and believes that he could keep fighting through it. But I guess this opportunity came up that he thought was good for him.”

John Brooks, a 29-year-old defender with hopes of regaining a spot on the U.S. roster, was on the verge of signing with Mallorca after leaving Wolfsburg at the end of last season.

Goalkeepers are in flux. Zack Steffen, loaned from Manchester City to second-tier Middlesbrough, missed the last two matches because of a knee injury. Matt Turner, in his first season at Arsenal, appears likely to play only in the League Cup and perhaps the Europa League. Ethan Horvath starts at second tier Luton and Sean Johnson at New York City.

“It’s something we think about,” Berhalter said. “I think there’s still time and we’ll have to see.”

Two prep matches remain for the Americans, against Japan on Sept. 23 at Düsseldorf, Germany, and vs. Saudi Arabia four days later at Murcia, Spain.

“It’s a tough spot because on one hand I would love the guys to be playing every week,” Berhalter said. “But it’s not always possible and the player also has his own career to think about, not just the national team in the World Cup.”

As Berhalter’s Nov. 9 World Cup roster announcement approaches, forward is his most uncertain position. He likely will pick two-to-four.

Jordan Pefok, 26, has three goals in his first five games for Union Berlin, scoring twice in the Bundesliga. Josh Sargent, 22, has four goals in his first seven league matches for second-tier Norwich. Haji Wright, 24, has five goals in four games this season for Turkey’s Antalyaspor. Brandon Vázquez, 23, is fourth in Major League Soccer with 16 goals this season and Dallas’ 21-year-old Jesús Ferreira has 15.

“You hope that they keep scoring and you hope that they make it difficult for us as a staff,” Berhalter said. “You certainly would rather pick from guys that are scoring than guys that aren’t scoring. And with Ricardo Pepi going to Groningen, hopefully he’s going to get into gear also and then make it challenging.”

Berhalter said he hasn’t decided whether his September roster will include Vázquez, who has not played for the national team.

After opening against Wales, the Americans play England in a Black Friday matchup on Nov. 25 and close group play four days later against Iran. Qualities for the Cup roster may be different than during qualifying.

“There could be an example of guys that want to look at in this camp and we know enough information about other players that we don’t need to look at them,” he said. “There could be an argument that the physicality that we were looking for against El Salvador isn’t going to help us as much against England.”

“Got a ton of respect for Tim and what he’s doing,” Berhalter said.