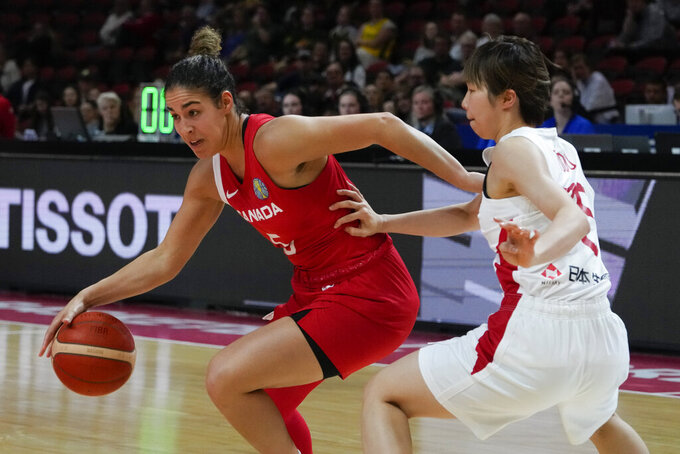 SYDNEY (AP) — It was 11 long months for Kia Nurse after she tore her right ACL in a WNBA playoff game last year.

After missing the Phoenix Mercury's entire season, she's back and leading Canada to a strong start in the women's World Cup. The team is 3-0 and clinched a spot in the quarterfinals with two games left.

“I've seen a lot of change the last few years,” Nurse said of Canada's basketball program. “An entirely new coaching staff, some new players. Its been amazing to see the new people helping our team. It's something we rely on.”

Longtime Canadian players Kim Gaucher and Miranda Ayim retired, paving the way for younger players to step up. Nurse and Natalie Achonwa are now two of the veteran leaders despite being under 30.

“What we've really done is invested in the process,” Achonwa said. “We were in Canada together for two weeks and then came here two weeks early. That's something we haven't done in the past. We are really committed to what (coach) Victor (Lapeña) wants for us.”

Nurse said she was a little nervous playing in a meaningful game for the first time since she got hurt. Once she got her first points against Serbia in the tournament opener, those nerves went away.

“It's really fun to be out there,” she said. “The first basket I scored calmed everything down. The contact on it was one of the scary things when you're coming back.”

Nurse let loose with emotion after that play — “a little scream.”

“I think that was a combination of the anger the tears and the hard days,” she said, "but hey you're back playing basketball and that's fun."

Achonwa knows exactly what Nurse was going through having torn her on ACL when she was in college at Notre Dame in 2014.

“We we first got here, I told her, ‘Don’t take this the wrong way but you look a lot better than I thought you were going to look,'” Achonwa said. “I'm really just happy she was able to come back and compete in this tournament. She's a really competitive person and it means a lot for her to play in this jersey and to play well.”

Nurse said she had been trying to get back on the court for the WNBA playoffs, but the timeline didn't work.

“It wasn't safe to do and the Worlds were more realistic talking to the trainers and doctors,” she said.

Now she's here and hoping to lead Canada to its first medal at the World Cup since 1986, when the Canadians won the bronze. They've already beaten last year's Olympic silver medalist, Japan, as well as France and Serbia.

A victory over Australia next would clinch the top seed in the group.

“To be in the top two would be great for us,” Achonwa said. “We're taking it one game at a time.”