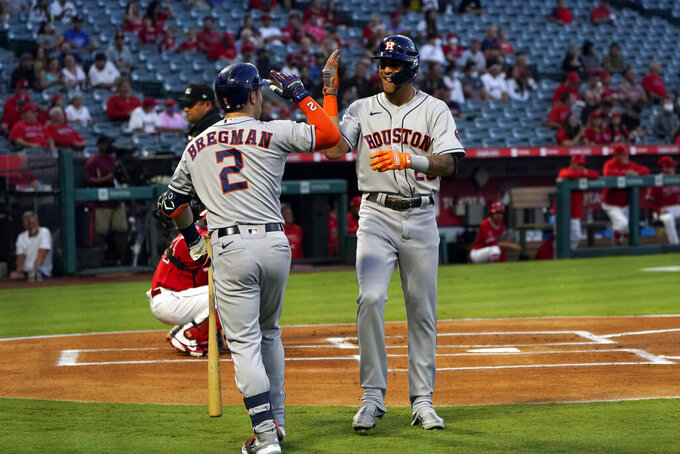 ANAHEIM, Calif. (AP) — With a well-rested Framber Valdez on the mound turning in one of his best performances in an outstanding season, the Houston Astros really didn't need all the runs they racked up on a blowout night at the Big A.

Valdez pitched seven innings of six-hit ball, Marwin González launched a grand slam and the Astros moved closer to the AL West title with a 10-0 victory over the Los Angeles Angels on Monday.

Martin Maldonado socked a three-run homer in the eighth, José Siri hit a leadoff homer and Carlos Correa had an early RBI single among his four hits as the Astros (89-61) opened their final road trip of the regular season by getting 17 hits in their fifth win in six games.

Valdez (11-5) came back strong after missing his previous turn in the rotation with a small cut on his hand. The left-hander struck out six and pitched around three walks. He escaped a bases-loaded jam with his 98th and final pitch in the seventh.

“I really took advantage of that time off not to just rest, but to focus on my next outing,” Valdez said through a translator. “I wanted to make sure I did my best job. ... What I need to do is focus when the playoffs are coming and be ready to do my job 100%. We’re just ready to give it everything we have and to get to that World Series.”

Houston continued to close in on its fourth AL West championship in five seasons by moving seven games ahead of second-place Oakland, which lost to Seattle. The Astros’ magic number dropped to six.

“I watch the scoreboard every day, but we just want to go out and win,” Houston manager Dusty Baker said. “We’ve still got some work to do. ... If you just win, that magic number will no longer be magic.”

Jaime Barría (2-4) gave up 10 hits while pitching into the sixth inning for the Angels, who dropped six games under .500 for the first time since late June with their fourth consecutive loss and 13th shutout defeat.

Los Angeles (72-78) is fading down the stretch, going 6-11 in September and moving closer to its sixth straight losing season and seventh straight non-playoff season.

Los Angeles loaded the bases with two outs in the seventh, but Valdez induced a grounder from David Fletcher to Correa, whose bouncing throw from shortstop beat the Angels speedster to first.

“We just kept putting the ball on the ground against (Valdez),” Angels manager Joe Maddon said. “They have good pitching. Among all the (playoff-bound) teams I’ve seen so far, I think they’re the best one I’ve seen. They’ve got a pretty complete roster.”

González, filling in for a resting Jose Altuve, drove in five runs and connected in the ninth inning for his third homer since rejoining the Astros two weeks ago. Baker praised González both for his swing and his immediate resumption of a leadership role in the Astros’ clubhouse.

Shohei Ohtani went 0 for 4 with a 386-foot flyout to deep center in the eighth inning, going hitless one day after striking out 10 Athletics on the mound. Ohtani is batting .201 since July 29, and he hasn't homered since Sept. 10.

Angels: Justin Upton won't play for the rest of the season due to back pain. Upton last played Sept. 1. The 34-year-old outfielder made $23 million this season while batting .211 with 17 homers and 41 RBIs in 89 injury-plagued games. He is scheduled to make $28 million in 2022, the final year of his contract.