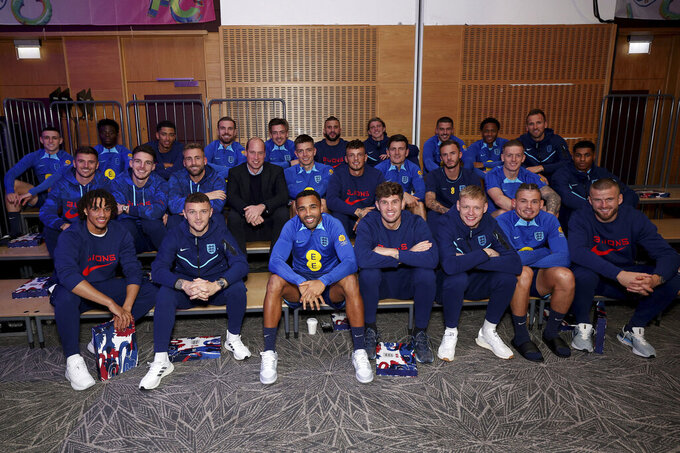 Eddie Keogh, ASSOCIATED PRESS
Britain's Prince William, second row at center, sits with the England soccer team at St George's Park ahead of the team's trip to the World Cup in Qatar, in Burton upon Trent, England, Monday, Nov. 14, 2022. Prince William joined a private team meeting and presented the players with their shirt numbers on Monday evening. (Eddie Keogh/The FA via AP)

GENEVA, Switzerland (AP) — European soccer shapes to have some World Cup winners with 73% of players at the tournament coming from clubs in the sport’s richest continent.

That’s despite Europe providing just 40% of the World Cup teams with 13 qualifying slots in the 32-nation lineup in Qatar.

Bayern Munich is the best represented club with 17 players selected for the World Cup, with Barcelona and Manchester City each having 16, according to research published Tuesday by European soccer consultants LTT Sports.

Just 27% of more than 830 players selected for World Cup duty play with clubs in other continents, LTT Sports said. Qatari club Al Sadd has 15 players at the tournament that starts Sunday.

That total is slightly up on the 26% figure at the 2018 World Cup where each of the 32 squads had 23 players instead of the current 26. FIFA allowed three extra players in squads named because of the effects of disruption and fixture congestion during the COVID-19 pandemic.

Outside Europe, the United States and Saudi Arabia were tied for the countries whose clubs have supplied the most World Cup players. Each has 35 in squads that had to be notified to FIFA by a Monday deadline.

European clubs have the wealth and lure of playing in competitions like the Champions League to ensure employing most of the best non-European talent. The overseas players have helped to raise standards in Europe whose national teams have won the past four World Cup titles: defending champion France, Germany, Spain and Italy.

Argentina’s Lionel Messi has played his entire professional career in Europe; Sadio Mané moved from Senegal as a teenager; and Neymar left Brazil at age 21 before he played at a World Cup.

Argentina is leaning heavily on the top-five European leagues by calling up 23 players, including Messi from Paris Saint-Germain, from clubs in England, Spain, Germany, Italy and France.

The concentration of talent is such that 70 players were selected for the World Cup from Italian clubs, according to LTT’s research, even though the national team did not qualify.

The second-tier English Championship has 29 players selected, though none for England.

The World Cup means home comforts for the seven players selected for countries other than Qatar who play for clubs in the host nation.

Cristiano Ronaldo’s explosive interview with Piers Morgan could raise some tensions within the Portugal squad before the World Cup.

Ronaldo may be looking for a way out of Manchester United after saying in the interview he feels “betrayed” by the club and does not respect manager Erik ten Hag. In another excerpt released before the full interview is broadcast, Ronaldo said United's owners, the Glazer family, “don’t care about the club.”

Ronaldo has now linked up with the Portugal squad that contains two teammates from United — Diogo Dalot and Bruno Fernandes.

The Portuguese soccer federation published footage on Monday of Ronaldo and Fernandes greeting each other in the locker room ahead of practice and the interaction looked frosty. Or was it just for show because the cameras were on them?

Portugal coach Fernando Santos will have to hope internal club issues don't affect the team's buildup to its opening game against Ghana on Nov. 24.

Portugal midfielder João Mário played down the issue, saying Monday: “I don't see a problem with the timing (of the interview) because everyone always speaks about Cristiano, so it's fine for us.”

Coach Didier Deschamps has an anxious wait to see if his best central defender, Raphael Varane, is fit to face Australia on Nov. 22 — exactly a month since he limped off for Man United with a hamstring injury.

“He's doing well," Deschamps said. “We're not going to be reckless, but he's meant to be ready for the first match.”

Varane was a standout helping France win the 2018 edition, along with excellent midfield play from Paul Pogba and N'Golo Kanté. They are both already out injured.

Who Varane would partner is uncertain after fellow World Cup winner Presnel Kimpembe was replaced Monday, also due to a hamstring injury. Kimpembe played 15 minutes for PSG on Sunday but had not recovered fully after a six-week layoff.

There's also nagging doubt about Karim Benzema's fitness. Since winning the Ballon d’Or last month, Benzema has played less than 30 minutes for Real Madrid coming off the bench in a Champions League game.

Deschamps dismissed suggestions that a late call Monday for striker Marcus Thuram was linked in any way to Benzema's fitness.

England will head to Qatar with the royal seal of approval.

Prince William visited the England squad at its St. George’s Park training base on Monday. He joined a private meeting in the evening before presenting players with their World Cup jerseys, one by one.

After the presentation, the prince told the team the whole country was behind them.