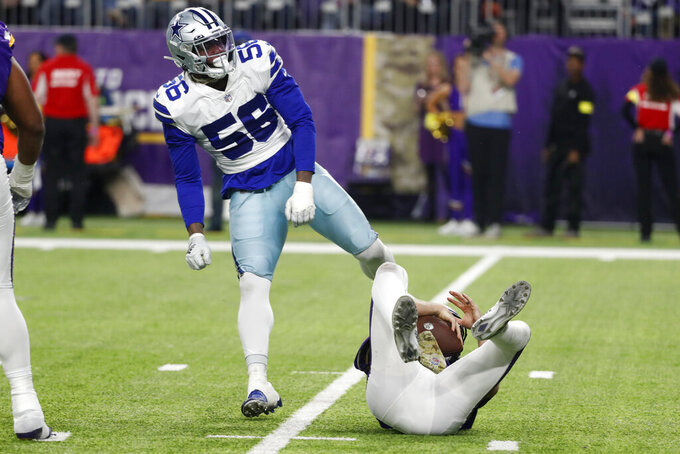 The outspoken and often-too-optimistic Jones has stayed away from such bold thoughts as the years without even a trip to the NFC championship game have piled up (this is 27).

The talk would have seemed crazy just a week earlier after a collapse the franchise had never seen in Green Bay. The Cowboys were 195-0 when leading by at least 14 points entering the fourth quarter before Aaron Rodgers and company rallied for an overtime victory.

Then again, the biggest road rout in club history — 40-3 over Kirk Cousins and the Vikings — can change things in a hurry.

“But I sure do think that what I see out here right now is the team like that, you could go get a Super Bowl with.”

The Cowboys (7-3) might not get a home game in the playoffs with Philadelphia leading the NFC East with the best record in the NFL.

Dallas is tied with the Giants with New York visiting on Thanksgiving. The Cowboys won the first meeting at the Meadowlands.

It seems safe to say any wild-card host wouldn't be thrilled to find out Dallas is the visitor.

Dak Prescott was 22 of 25 without a sack or interception while Kirk Cousins was just 12 of 21 with a career-high seven sacks by a defense that held Dalvin Cook and company to 73 yards rushing — thanks in part to Minnesota's huge deficit — after giving up more than 200 in each of the previous two games.

In other words, it was about as complete a performance as Dallas has had, and quite an emphatic response to a defeat that led to questions of whether the Cowboys were contenders.

“I too thought this game was going to tell us what we are,” Jones said. “I don’t know that we’re that. I really don’t. But I know this, that we’re not a team that doesn’t respond when it’s wounded.”

The Elliott-Pollard tandem that was gaining momentum before Elliott missed consecutive games because of a knee injury had its best showing so far.

Pollard's open-field speed was on display again, but when he was stuffed twice on the goal line, Elliott got in on the next play.

The next time Dallas had the ball on the Minnesota 1-yard line, the Cowboys didn't bother trying Pollard. Elliott converted again, this time on his second push after initial contact.

The Cowboys need to make sure they're on their recruiting game this week. Jones confirmed reports that free agent receiver Odell Beckham Jr. planned to visit the Cowboys and Giants sometime after their Thanksgiving meeting could end up deciding between the two.

Beckham, who tore an ACL in the Super Bowl with the defending champion Los Angeles Rams, knows both teams well. He was Dallas' division rival his first five seasons with the Giants.

“Certainly it's time for us to sit down and visit,” Jones said.

LB Micah Parsons had his fifth two-sack game of the season, which accounts for all 10 of his sacks. The reigning NFL Defensive Rookie of the Year had 11 QB pressures a week after getting shut out in that category for the time in his career, according to NFL Next Gen Stats.

Connor McGovern's days as the starting left guard this season could be numbered. Rookie Tyler Smith, who replaced Tyron Smith at left tackle after the elder Smith tore a hamstring in training camp, replaced McGovern with the game out of reach.

It was an indication Tyler Smith could slide over a spot if Tyron Smith returns in December as the Cowboys hope. Smith was working at left guard in the offseason and camp before Tyron Smith's injury.

LB Anthony Barr's absence when he was close to a return from a hamstring injury could mean that he will get to play against the Giants even though it's a short week. Parsons limped off in the third quarter after getting a lower leg rolled up on during a tackle. He later returned and said after the game he was OK.

35 — That was the previous largest margin of victory on the road for the Cowboys. They beat the 35-0 Giants in the season opener in 1995. Dallas beat Philadelphia 42-7 in 1971. The Cowboys won the Super Bowl in both of those seasons.

The visit from the Giants is the start of a three-game homestand for Dallas. Two AFC South opponents follow in Indianapolis and Houston.