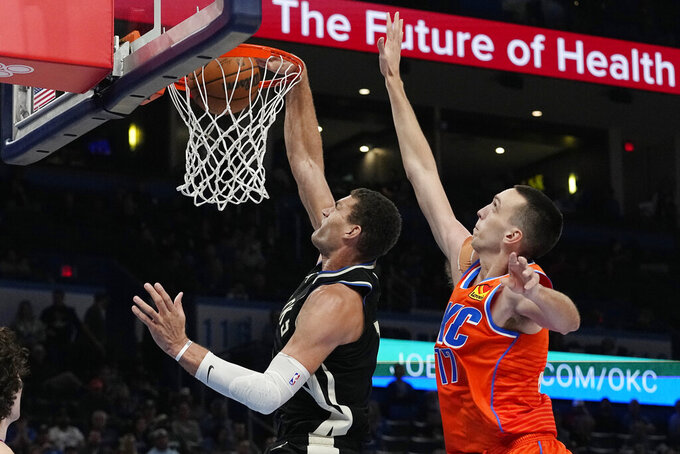 The top of the Eastern Conference looks about as expected — with Boston and Milwaukee currently neck and neck for the lead.

Those fast starts have been anything but routine, however.

The Celtics suspended their coach before the season even started, but under interim choice Joe Mazzulla, they're now on a seven-game winning streak and have the best record in the NBA. The Bucks won their first nine games, but recently they've had to deal with Giannis Antetokounmpo's occasional absences. They've won two of three when he's been out.

“It just shows our depth and how good of a team we truly are,” Milwaukee's Brook Lopez said recently. “Coach (Mike Budenholzer) — he said before, it’s like, it’s kind of exciting. Giannis gets to rest, refill his cup, and we get a chance to get better and see what we’re like without Giannis on the court, and get better in that way.”

The Celtics (11-3) and Bucks (10-3) don't play each other until Christmas. For now, these two teams — who played a stirring seven-game playoff series in the second round last season — are bringing a bit of normalcy to the standings. That's been largely absent in the West, where Golden State is muddling along under .500 while Utah and Portland are around the top of the conference.

The Celtics went to the NBA Finals last season in Ime Udoka’s first season as coach. Then he was suspended for at least this season for violating team rules by having a relationship with a female staffer within the organization. Mazzulla took over and has the team rolling. Boston routed Nikola Jokic and Denver 131-112 on Friday. On Monday night, the Celtics rallied from a 15-point deficit to beat Oklahoma City 126-122.

“These guys have been through a ton, and it helps them in a game like tonight where they really don’t have it going, and then they’ve got to turn it on on both ends of the floor and they did," Thunder coach Mark Daigneault said after Monday's game. "So credit them. They went and got that one.”

Boston is No. 1 in the league in offensive rating, and Milwaukee is No. 1 in defensive rating. The first time the Bucks played without Antetokounmpo this season was a little over a week ago against Oklahoma City. Lopez scored 25 points, Bobby Portis had 21 rebounds, Jrue Holiday had 13 assists — and Milwaukee held the Thunder under 100 points to win by 14.

“I think we all knew obviously that we’d all have to chip in,” Lopez said. “Pretty much everyone came on, had an impact.”

These are the stretches that test a team over the course of an 82-game season, when injuries or just normal wear and tear leave a star player unavailable. That win over the Thunder gave Milwaukee a 9-0 record, and since then, the Bucks have played twice more without Antetokounmpo, who has dealt with left knee soreness.

Still, they've shown they can win without their biggest star. Another team that's done that of late is the Washington Wizards, who have won four straight despite playing all of those games without Bradley Beal, who went through health and safety protocols.

The last game Beal played in was Nov. 4, a 42-point loss to Brooklyn. Coincidentally, that was also the first game for the Nets following Kyrie Irving's suspension. Irving was suspended after posting a tweet with a link to a documentary that includes Holocaust denial and conspiracy theories about Jews. The Nets said they suspended him in part because he wouldn't say unequivocally he has no antisemitic beliefs.

Brooklyn looked downright dysfunctional while losing six of its first eight games. Coach Steve Nash was replaced after the team's seventh game, and then — with Jacque Vaughn serving as acting coach — Irving scored just four points in a loss to Chicago.

But since then, Brooklyn has won four of six, all without Irving — and the Nets decided to keep Vaughn as their head coach going forward. His team isn't surging quite the way Mazzulla's is, but Brooklyn is hopeful it has found the right leader after an ugly start to the season.