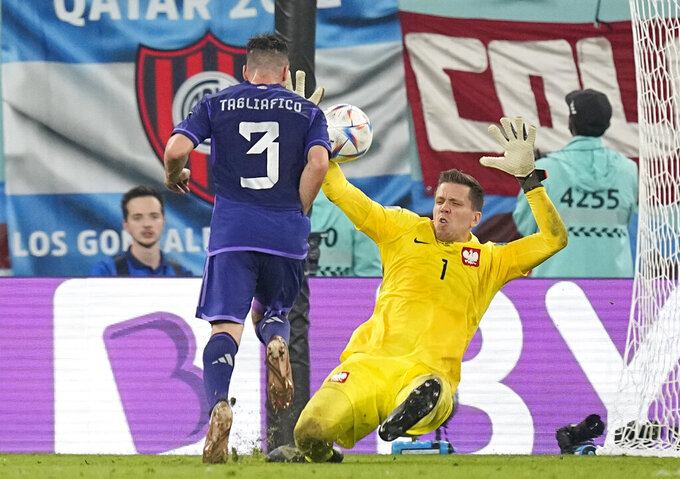 DOHA, Qatar (AP) — It’s a huge day for goalkeepers with big reputations when defending champion France faces Poland in the round of 16 at the World Cup on Sunday.

Hugo Lloris will tie a national team record for Les Bleus four years after lifting the trophy as captain. Opposite number Wojciech Szczęsny is a penalty-saving, wise-cracking No. 1 who seems to be enjoying the tournament more than any other player.

Both get a stage to shine at Al Thumama Stadium trying to deny two of the most feared forwards in Qatar — Kylian Mbappé and two-time FIFA player of the year Robert Lewandowski.

“The key to stopping Mbappé? It’s me,” Szczęsny quipped when Poland’s place in the knockout bracket was confirmed.

Lloris will face Lewandowski in an international game for the first time when he matches France's record of 142 appearances held by Lilian Thuram, the right back in the 1998 world champion team.

“It’s quite something and I’m very honored,” Lloris said Saturday. He was in the same France squad as Thuram as an uncapped 21-year-old in 2008 though was never played with him.

France coach Didier Deschamps, who played often with Thuram and was captain in the 1998 final in Paris, paid tribute to them.

“They have shown exemplary professionalism for the national team,” Deschamps said Saturday.

Lloris is a naturally quiet and courteous leader of this talented France team and he praised Szczęsny, who he previously faced at opposite ends of the north London rivalry between Tottenham and Arsenal.

“He’s playing a magnificent tournament,” Lloris said. “Poland deserve to be here at this stage and they’ve got a great goalkeeper as well.”

Szczęsny is the only goalkeeper this World Cup to have saved two spot kicks — one against Saudi Arabia and the second against Lionel Messi. Szczęsny himself conceded the latter one for brushing the Argentina great’s face with his glove when stretching for a cross. It was scoreless at the time in a game Argentina won 2-0 on Wednesday.

Szczęsny’s told the story of how he bet Messi during a lengthy video review that the penalty wouldn't be awarded, only adding to his quirky time in Qatar.

The character of the 32-year-old Juventus goalkeeper, who is set to play his 70th game for Poland, is no surprise to long-time teammates.

“It’s not that Wojciech Szczęsny started to be such a great goalkeeper in this tournament — he’s been a great goalkeeper for years,” forward Arkadiusz Milik said Saturday through an interpreter. “It’s not a coincidence that in his career he played for wonderful clubs.”

Poland likely will need Szczęsny and Lewandowski to excel in its first knockout game at a World Cup since 1986. Since that 4-0 loss to Brazil, France won both its world titles and also was a beaten finalist.

Deschamps highlighted Lewandowski’s qualities as clever, technically gifted and knows how to use his body intelligently against defenders.

“He didn’t get a lot of the ball in the group stage, but with just one chance he can be very dangerous,” the France coach said.

Giving Poland some hope is that France lost in the round of 16 last year at the European Championship against Switzerland. Mbappé had the decisive penalty saved in a shootout after a 3-3 draw.

“We talked about that a lot,” said Lloris, who couldn't stop any of the five Swiss spot kicks that night in Bucharest. “You have to be confident, but if a penalty is well taken, then the goalkeeper has no chance of stopping it.”

In Qatar, Szczęsny might be just the one to prove that wrong.