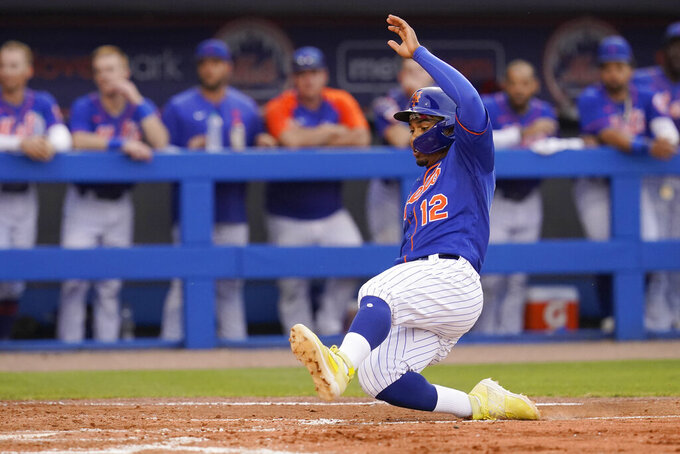 NEW YORK (AP) — When they paired Max Scherzer with Jacob deGrom, the New York Mets all but aced their offseason.

Boasting a 1-2 pitching punch that's combined for five Cy Young Awards, the Mets carry enormous expectations (and a soaring payroll) into 2022 after their latest winter overhaul — on the field and off.

“This is a complete crash course for me," Scherzer said at spring training in Florida. “I can’t wait."

Buck Showalter takes over on the bench, back in the Big Apple to manage his fifth major league team.

All-Star starter Chris Bassitt joins deGrom and Scherzer in a resplendent rotation, and newcomer Starling Marte brings speed and power to the outfield.

Extremely eager to win, second-year owner Steve Cohen reached into his deep pockets and committed nearly $260 million to those five free agents during a winter bonanza that positioned the Mets to have baseball’s second-largest payroll (more than $250 million) behind the Los Angeles Dodgers.

“Steve has a mission,” said shortstop Francisco Lindor, signed to a $341 million contract.

But it's hardly the first time New York has looked flush on paper before opening day — regardless of the price tag.

Regular underachievers lately, the Mets are coming off their fourth losing season in five years and 10th in the last 13. They’ve made the playoffs twice in the past 15 seasons and haven't won the World Series since 1986.

The competition looks tough atop the NL East, where the second-place Phillies beefed up and the World Series champion Braves appear loaded. New York spent 103 days in first place last season — the most ever for a team that finished with a losing record (77-85).

“This was a good club for quite a while last year," Showalter said. "I kept telling the players about the people who were here before but aren’t here — those are good baseball people. That’s how fleeting it can all be.”

For a club consistently derailed by injuries, keeping Scherzer, deGrom and Bassitt humming will be critical.

Scherzer turns 38 in July and the 33-year-old deGrom didn’t pitch after July 7 last season due to a sprained elbow that seems fully healthy this spring. Bassitt, 33, made a remarkable recovery last year from a frightening line drive to the face.

Robinson Canó returns at age 39 after sitting out last season while serving his second PED suspension.

“He's maybe one of the happiest guys in camp,” Showalter said. “He’ll be the first to tell you that (his problems) were self-inflicted. But you can tell, him being away from this has put him in a good spot this spring.”

Canó could fit at DH, where the Mets have several options including J.D. Davis, Dominic Smith and first baseman Pete Alonso.

“The way you look at your bench with the DH is totally different. Actually, if anyone has the potential to benefit from that rule change, we’d be up there in the conversation,” Showalter said.

Lindor looks to bounce back from a mostly dreadful Mets debut at the plate last season, when the four-time All-Star batted a career-worst .230.

Second baseman Jeff McNeil and catcher James McCann also hope to rediscover their swings in a disappointing lineup that was too reliant on Alonso (37 HRs, 94 RBIs, .863 OPS) last year.

Pitching coach Jeremy Hefner was the only coach retained on the new staff under the 65-year-old Showalter, a proven winner who also has managed the Yankees, Arizona Diamondbacks, Texas Rangers and Baltimore Orioles. He replaces Luis Rojas, let go after two losing seasons as Mets skipper.

BLAST FROM THE PAST

Cohen, a longtime Mets fan, has shined a spotlight on the franchise's history since buying the team in November 2020.

This season, the Mets plan to unveil a Tom Seaver statue at Citi Field, celebrate the 10th anniversary of Johan Santana's no-hitter, retire Keith Hernandez's No. 17 jersey (on July 9) and bring back Old-Timers’ Day (on Aug. 27) for the first time since 1994.