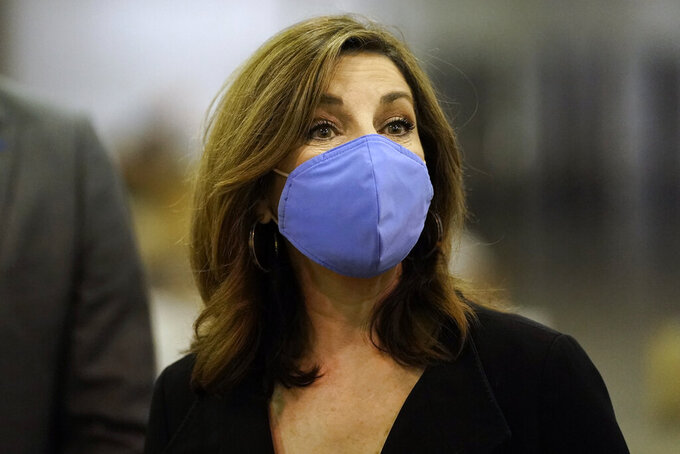 Sue Ogrocki, ASSOCIATED PRESS
FILE - In this Aug. 18, 2020 file photo, Oklahoma State Superintendent of Public Instruction Joy Hofmeister answers a question at the Central Oklahoma PPE distribution warehouse in Oklahoma City. Hofmeister said Tuesday, Aug. 10, 2021, she will meet this week with Gov. Kevin Stitt to discuss whether he will issue an emergency order because of rising coronavirus cases, which would allow schools to require masking. (AP Photo/Sue Ogrocki, File)

OKLAHOMA CITY (AP) — Oklahoma’s public schools superintendent said Tuesday that she will meet this week with Gov. Kevin Stitt to discuss whether he will issue an emergency order, because of rising coronavirus cases, which would allow school districts to require masking.

Joy Hofmeister said she is not aware of any district implementing a mask mandate, which would violate a law banning school mask mandates signed by Stitt in May.

“We do have to abide by the law,” Hofmeister said. “There could be changes if the governor chooses to return local control” to districts by declaring a state of emergency.

“I do have a meeting this week with the governor, we'll certainly be talking about that,” Hofmeister said.

Stitt, who tweeted that he was in Altus as part of traveling meetings around the state with his cabinet, has said he sees no need for an emergency order. The governor’s office did not immediately respond to a request for comment Tuesday.

The seven-day rolling average of new cases daily rose to 2,025 on Tuesday, the state health department reported, up from 1,158.9 on July 25, and a one day increase of 1,042 new cases, a day after the state topped 500,000 total cases reported since the pandemic began.

There were 919 virus-related hospitalizations, including 250 in intensive care, according to to the health department.

Although virus-related hospital numbers are below peak levels in January, hospitals are stressed, said Dr. Dale Bratzler of OU Health.

“Remember, there are many other people for other things at the same that we have this tremendous shortage of nurses," Bratzler said.

“The ability of hospitals to repurpose beds, to bring in contingent staff ... is dependent on the governor declaring a state of emergency and if our hospitalizations keep going up then that may be necessary," according to Bratzler.

On Monday, the state attorney general's office filed an appeal with the state Supreme Court a Friday ruling that Oklahoma reinstate a supplemental federal unemployment assistance program that was ended in June.

The court combined the case with a similar second lawsuit, with both saying Stitt exceeded his authority in May with a declaration ending the state's participation in the program designed to assist those who lost jobs as a result of the pandemic.