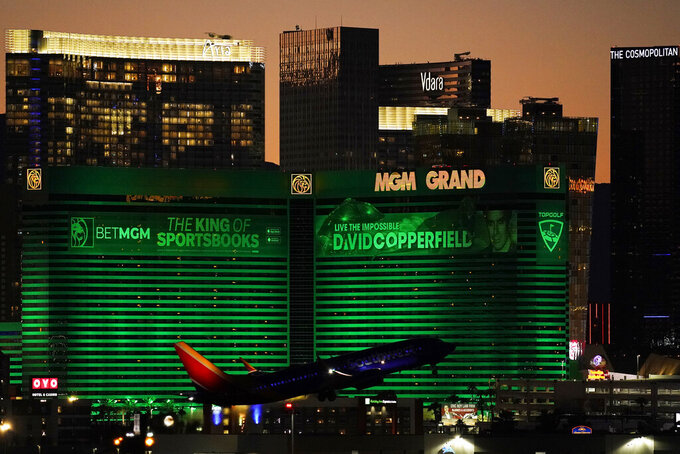 John Locher, ASSOCIATED PRESS
FILE - A plane takes off from McCarran International Airport near casinos along the Las Vegas Strip, Wednesday, Sept. 29, 2021, in Las Vegas. A trio of economic reports show that May was a good month for Nevada tourism and gambling, including passenger traffic characterized as the third-busiest ever at Harry Reid International Airport in Las Vegas. (AP Photo/John Locher, File)

LAS VEGAS (AP) — A trio of economic reports show that May was a good month for Nevada tourism and gambling, including passenger traffic characterized as the third-busiest ever at Harry Reid International Airport in Las Vegas.

The Nevada Gaming Control Board said Thursday that casinos statewide won $1.3 billion last month, the fourth-highest all-time and the 15th month in a row topping the $1 billion mark.

Michael Lawton, board senior analyst, said figures reported statewide and from Clark County, downtown Las Vegas and the Strip were the highest so-called “casino win” ever for the month of May.

At the airport, spokesman Joe Rajchel said the nearly 4.6 million arriving and departing passengers trailed monthly records set in October 2019 and May 2019 — before the coronavirus pandemic.

The number was boosted by nearly 800,000 international travelers, compared with about 50,000 a year ago, when almost all overseas flights were suspended because of the pandemic.

Lawton attributed a jump in casino baccarat play and winnings to the return of international travelers.

The state collected almost $92 million in taxes based on a May casino report. The figure is important because casino taxes make up about 17% of state revenues, second only to sales taxes. Nevada has no personal income tax.

Tourist tallies were steady from April to May in Southern Nevada, with about 3.4 million visitors, the Las Vegas Convention and Visitors Authority reported Thursday.

Convention attendance topped 391,000, up dramatically from last year but still down almost 25% compared with April 2019.

Average daily room rates at the nearly 152,000 hotel rooms in the Las Vegas area was almost $176.

The authority on Wednesday released a report taking a broader look at local tourism trends in 2021, developed with a local firm Applied Analysis. It called 2021 “a year of recovery for Southern Nevada’s tourism industry following a year of staggering impacts related to the COVID-19 pandemic.”