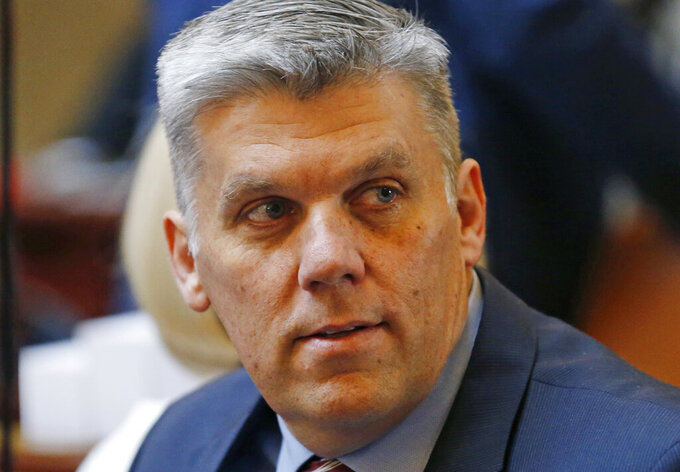 Rick Bowmer, ASSOCIATED PRESS
FILE - Rep. Phil Lyman, R-Blanding, is shown on the floor at the Utah State Capitol, in Salt Lake City on Jan. 28, 2019. Lyman says he plans to introduce legislation that would require all clergy to report child abuse to authorities. Lyman's proposal, announced Friday, Aug. 12, 2022, would eliminate the clergy-penitent privilege in a state where The Church of Jesus Christ of Latter-day Saints is the predominant religion. (AP Photo/Rick Bowmer, File)

SALT LAKE CITY (AP) — A Republican state lawmaker in Utah said Friday he plans to introduce legislation that would require clergy to report child abuse to authorities, eliminating the clergy-penitent privilege in a state where The Church of Jesus Christ of Latter-day Saints is the predominant religion.

Rep. Phil Lyman's news release came a week after The Associated Press published an investigative story focusing on cases in Arizona and West Virginia that found the church's abuse reporting system can be misused by church leaders to divert abuse accusations away from law enforcement and instead to church attorneys who may bury the problem, leaving victims in harm’s way.

Lyman, a member of the faith who himself served six years as a bishop of a local congregation, said he had already been working for months on his legislation but called the AP story “powerful” and an example of the kinds of problems caused by delaying report of the abuse.

He said he deeply values the repentance and confessional process. But he argued the clergy exception can delay intervention for victims and create uncertainty for clergy members. He would prefer to have clarity so clergy members could tell parishioners at the beginning of confessions that they are required to report abuse.

“People should be able to go and confess their sins to their bishop without fear of being prosecuted up until when they are confessing something that has affected someone's else life significantly," Lyman said. “Right now, you'd hear their confession and you would say, ‘Gosh, I don’t know what to do with this.' ”

Church officials didn't immediately respond to an email Friday seeking comment. The faith said in a statement issued one day after the AP story was published that the piece “seriously mischaracterized” the reporting systems and that a help line that local leaders are supposed to call to report abuse focuses on helping victims.

William Maledon, an attorney representing bishops and the church in a lawsuit filed by children who say they were abused in Arizona, told the AP last month that the bishops were not required to report the abuse.

Arizona and Utah are among more than 20 states with similar laws that give reporting exceptions to clergy who receive information about child neglect or sexual abuse during spiritual confessions.

Lyman has already discussed the legislation with Democratic Rep. Angela Romero, who introduced a similar proposal in 2020 that didn’t go anywhere in Utah's statehouse. Romero said she believes a majority of people in Utah — regardless of their faith — would support removing exceptions. Though she still expects some resistance from some religious institutions, her conversations with other lawmakers have given her confidence it will be seriously considered when the Legislature reconvenes in January.

“It’s going to require individuals contacting their elected officials and telling them they want to see the exemption go away,” she said.

Lyman said his bill isn't directed solely at The Church of Jesus Christ of Latter-day Saints, but he reached out to inform the faith on Thursday of his plans. He hadn't heard back yet as of Friday afternoon but said he expected to have a “meaningful conversation” with church officials about his proposal.

The church has its headquarters in Salt Lake City and an estimated two-thirds of the state's residents and the majority of state legislators belong to the faith.

“The exception for clergy seems to create some subjectivity and some ambiguity,” said Lyman, who is from southeastern Utah. “At best, it creates some delays. And to me it puts clergy in a little bit of an awkward position.