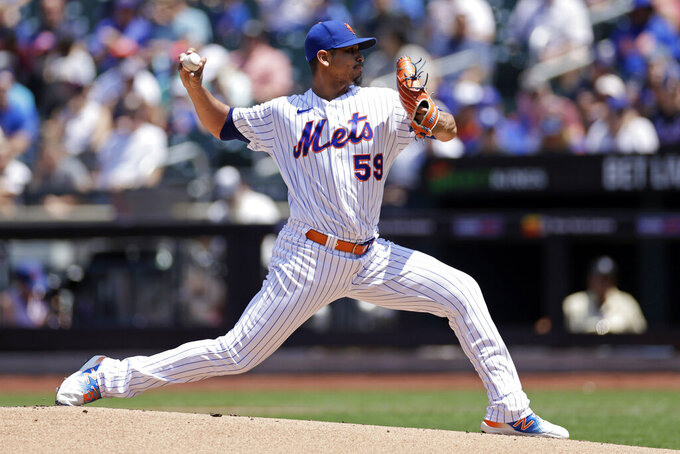 NEW YORK (AP) — Eduardo Escobar joined several Mets on the mound as they encircled Carlos Carrasco and high-fived him for a job well done.

Plenty to feel good about, too. By the end of a winning weekend, two of New York's most pivotal pieces were back on track.

Escobar homered for the third straight game, Carrasco rebounded from a pair of poor starts and the Mets topped the Texas Rangers 4-1 on Sunday.

Starling Marte went deep for the second consecutive day and Jeff McNeil hit an RBI double to help the NL East leaders take two of three in the interleague series, giving them 15 wins in their last 20 home games.

The victory was No. 1,600 as a major league manager for Showalter, who beat one of his former teams to pass Hall of Famer Tommy Lasorda for 22nd place.

“That's a lot of wins in the big leagues," Escobar said.

Jonah Heim homered for the second consecutive game for the Rangers, his 12th of the season. He began the day tied with Atlanta backstop Travis d'Arnaud for most in the majors as a catcher.

Carrasco (9-4) struck out eight and walked one in 5 2/3 innings. He had a 9.68 ERA in his previous four starts and was coming off consecutive losses to Houston, which tagged him for a combined 11 runs and 10 hits over 6 2/3 innings.

“It feels nice," Carrasco said. “Today I was using more of my breaking balls and going with my fastball in and out. That combination was great. That’s what we’ve been working on. I couldn’t do it in my last game.”

The 35-year-old right-hander was lifted with two on and high-fived his infielders before clapping into his glove as he walked off to a standing ovation from the crowd of 25,241.

Edwin Díaz got three outs for his 18th save in 21 tries. With two runners on, he whiffed Mitch Garver and got Leody Taveras on a fly ball to end it.

A mistake by Texas triggered a quick Mets rally in the fourth.

Pete Alonso struck out to start the inning, but the pitch got away from Heim behind the plate. His throw to first was into the runner, arriving just before Alonso, and the ball ticked off the mitt of Nathaniel Lowe, who reached for it tentatively with Alonso approaching.

The burly slugger hustled to second base as the ball rolled into right field. Heim was charged with an error, the first for the Rangers in six games. They had committed only one in 13 games since June 17 — fewest in the majors during that span.

“It's a tough play all around, ball to the backstop like that. It’s an odd play,” Texas manager Chris Woodward said. “It's a really hard play for a first baseman.”

McNeil laced the next pitch from Jon Gray (4-4) for a tiebreaking double, and Escobar drove an 0-2 fastball into the Texas bullpen in right-center for his ninth home run to make it 4-1.

“He's swinging the bat extremely well. I'm proud of him,” said a smiling McNeil, noting how the upbeat Escobar often tells his teammates he's proud of them. “He's doing some great things right now for us, putting some big swings on the ball. Just super happy for the guy and glad he's breaking out.”

Escobar was pumped up as he began his trot. He homered in all three games of the series, including a three-run shot in a 4-3 victory Friday night.

The switch-hitting third baseman is batting .228 with 36 RBIs in his first season with the Mets. He said the key to his recent resurgence has been just focusing on having fun.

“I think sometimes you can want something too much. He’s just a consistent human being and that’s surprising when you see him going through some spells, which he has been through before,” Showalter said. "Through thick and thin, he hasn’t changed — effort or defense.”

Marte homered on an 0-1 pitch in the first inning for the second straight day.

Gray gave up four runs, three earned, with seven strikeouts and one walk in 5 2/3 innings. He won his previous three starts, and Texas had won nine straight games started by Gray and teammate Martín Pérez, who beat the Mets on Saturday.

“I thought Carrasco was good. I know he came into this game not pitching as well as he normally does, but the changeup was good today," Woodward said. “I thought he gave us fits with that changeup.”

Mets: RHP Jacob deGrom struck out five of the six batters he faced and threw 18 of 24 pitches for strikes in his first minor league rehab start for Class A St. Lucie. The other batter was hit by a pitch. The two-time Cy Young Award winner has been sidelined all season because of a stress reaction in his right scapula that caused inflammation. ... Backup outfielder Travis Jankowski (broken left hand) is headed to Triple-A Syracuse to begin a rehab assignment Monday.

New York promoted 20-year-old catcher and DH Francisco Álvarez from Double-A Binghamton to Triple-A Syracuse. Rated one of baseball’s top prospects, Álvarez was batting .277 with 18 homers, 47 RBIs and a .922 OPS in 67 games at Double-A.

Mets: RHP Taijuan Walker (6-2, 2.72 ERA) pitches Monday night in the opener of a three-game series at Cincinnati, which has the worst record in the National League. Hard-throwing rookie Hunter Greene (3-9, 5.72) goes for the Reds.