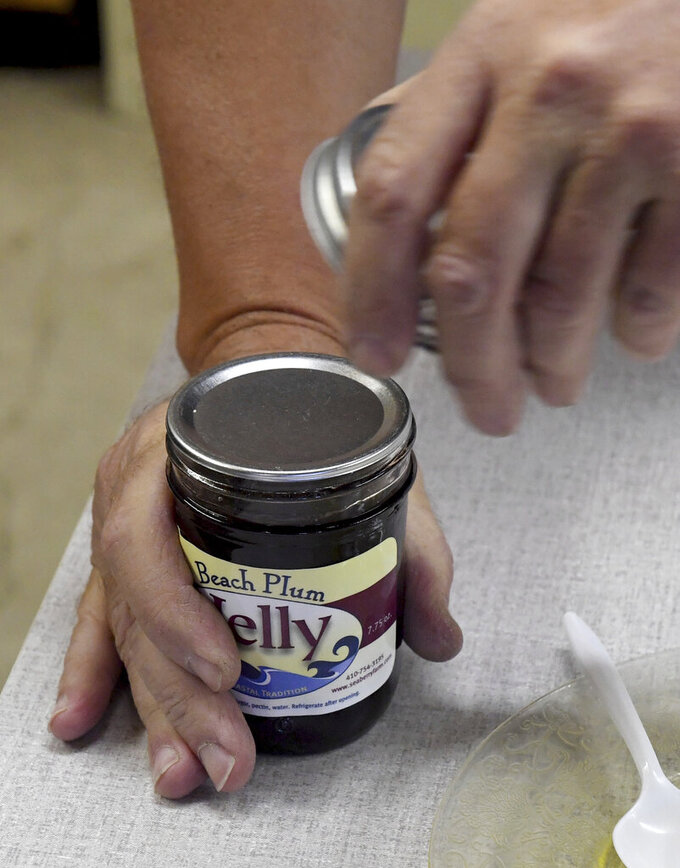 WILMINGTON, Del. (AP) — A 5-year-old boy darts through the sand around his home near the Indian River Inlet. He looks over his shoulder at the woman following him with a small woven basket and beckons her to follow.

Just moments before, this little boy watched as Krista Scudlark picked blueberry-like fruit off small trees at his parents’ home. He knew she was trying to find the best fruit to make jelly, so he decided he’d give up his secret — just this once.

“Miss Krista,” he said in a hushed tone. “I know where there’s a lot of beach plums.”

So, she followed the young boy through the sand, ducking underneath branches and dodging prickly cactus plants until they stumbled upon short bushes bursting with ripe fruit. He was right, Scudlark now recalls more than 20 years later: this was “the best spot” to pick beach plums.

For years, local families like this boy’s have coveted these special places to pick beach plums, a native fruit that grows in the dunes along the Atlantic coast. They’ve passed down jelly recipes and shared stories of searching for ripe fruit under the hot summer sun.

But for many more people, whether they’re visitors or Delaware residents, this source of coastal pride may remain somewhat of a mystery — a story held as close to the hearts of these locals as the secret places where their beach plums thrive.

Diane Hindman’s connection with beach plums started when she was a teenager and her parents bought a cottage east of Milford in Slaughter Beach. She spent many summers exploring the outdoors and the dusty purple fruit that decorated the wiry branches along the dunes.

“That’s when I was first exposed to the joys of beach plums,” she said.

In August, when the humidity weighed heavy and the bugs seemed relentless, Hindman and her family would trudge outdoors to pick beach plums. After sweating in the sand, she and her mother would bring their bounty into the kitchen where her father transformed the beach plums into a sweet jelly with signature tanginess.

Watching her father, Hindman learned everything she could about making beach plum jelly, and eventually she took on the role of chief “jelly-maker.” If her family doesn’t get their beach plum jelly at Christmas, she said, she knows she’s going to hear about it.

“My relatives, they just love it,” she said. “It’s part of our family history, so we’ve all been eating beach plum jelly on our toast.”

Stories like these abound among families who grew up along the coast. Krista Scudlark, owner of Backyard Jams and Jellies in Milton, remembers her grandmother making beach plum jelly in baby food containers — a technique Scudlark initially copied when she first started her business more than 30 years ago.

From the moment she began making jellies, selling them at the local hardware store and her friend’s bakery, Scudlark also kept alive the tradition of making beach plum jelly. But this time she used a recipe and some plums from a neighbor.

Now, with more than 100 different flavors of jellies and jams, she said the beach plum jelly is probably her best-seller.

“Part of it’s nostalgic,” she said. “It’s so nice to hear so many people that say, ’Oh, yours taste just like mom’s used to taste or my grandmother’s used to taste. And it’s just that thing, and they were raised with it.”

While jellies are the most popular way to eat this otherwise tart fruit, it’s not surprising to hear of some families who have gotten creative with recipes, such as Hindman’s father who made a beach plum liqueur called “beach plum yum.”

One local distillery has even taken this tradition one step further, creating a beach plum-flavored rum.

Greg Christmas, co-founder of Beach Time Distilling in Lewes, made the first batch of beach plum rum before opening the distillery six years ago.

“I remember taking it to a party and having everyone try it and asking what I should change,” he said. “Everyone said don’t change a thing.”

Since then, the beach plum rum — a dark purple alcohol that almost looks black when sitting on the shelf — has only grown in popularity, especially when mixed into the distillery’s top-selling cocktail called the Tsunami. Christmas points to the unique nature of the beach plum as a driving force.

While the tradition of cooking and eating beach plums goes back generations, the history of the fruit in southern Delaware can be traced back even further.

Early explorers recorded seeing these beach plums when they first arrived on the Atlantic coast in the 16th and 17th centuries. Some of the names of places throughout Delaware coastal area still show the lasting impact of this native fruit, too.

Now a wildlife refuge north of Lewes, Prime Hook was named when Dutch settlers noticed all the purple beach plums and called the area “Pruime Hoek,” which translates to Plum Point, according to the U.S. Fish and Wildlife Service.

Beach Plum Island is also part of the Delaware State Parks system, and Scudlark said she has a theory that the Cotton Patch Hill neighborhood in Bethany Beach may have come from the cotton-like appearance of the beach plum flowers in the spring.

While the naming of Slaughter Beach has been a point of debate and contention over the years, Hindman has researched possible origins of the name, and spoiler alert: one theory relates to beach plums.

Hindman discovered that the Old English word “slahtreow” is a surname for someone who lived near a blackthorn bush, another native plant that produces fruit that looks a lot like beach plums.

And yet, beach plums are not exclusive to Delaware — in fact, they can be found from Maine to Maryland and are especially popular in the Cape Cod, Massachusetts-area and across the bay in Cape May County, New Jersey.

He now operates Seaberry Farm in Federalsburg, Maryland, with his wife Wenfei Uva. Found along a winding road between corn fields, the farm is primarily home to fields of flowers like snowy white dahlias that stretch in endless rows, but just in the distance is a small orchard of trees full of round, purple beach plums.

Uva is one of few people who cultivates native beach plums.

“I’ve always been interested in native fruits: the cranberry, the blueberry — they’re both native fruits that sort of took off,” Uva said. “There’s a lot of other fruits like the pawpaw and the beach plum, the persimmon, that really haven’t gotten off the ground yet.

Still, growing beach plums comes with plenty of challenges and risks, including fungus and the labor needed to prune and pick the plums. And while the fruit’s unique quality is what creates a market for beach plums, it also makes it difficult to find someone to process the plums at a commercial level.

This niche characteristic is both a strength and a weakness, Wenfei Uva said.

Partly because of these challenges, and the success of the flower business, Seaberry Farm has cut back on its production, focusing more on flowers for wholesale and special events.

“You can’t sort of be the Johnny Appleseed to more than one thing at a time,” Richard Uva said. “Because you’ve got to keep the business running, and sometimes the new fruits fail.”

Uva now grows about an acre and a half of beach plums.

Most of them go to Scudlark, who said she currently has two freezers packed full of beach plums, as well as Beach Time Distilling, which has tripled its batch of beach plum rum since the distillery first made it.

Over the years, other beverage companies or craft breweries like Dogfish Head have used Uva’s beach plums for specialty drinks. A handful of families also come to the farm to pick and make jellies for themselves, Uva said.

Sure, the beach plum may not be as universal as an apple or peach. But, for many people, beach plums offer something special: a bridge to the past or a memory of their families and time spent at the beach.

It’s that sense of childhood joy that people get when they search the outdoors for a hidden treasure in the dunes.

“It’s fun,” Richard Uva said. “It’s like finding a little jewel out there.”

Scudlark said she has two customers who moved from the area, one to Iowa and the other to Colorado, and she sends them cases of beach plum jelly each year because it reminds them of home.

It’s also heart-warming to hear people’s stories while at farmers markets, she said.

“I have so many people that come to all the markets and they’ll say, ’Oh, good you’re here. We came last year and got your beach plum jelly, and it was so delicious. We were hoping you were here, you’re the whole reason we came,” she said, a smile spreading across her face.

“That’s just so nice to hear that,” she said.

Beach plum enthusiasts hope that stories like these continue to be passed on through the generations, especially as continuing development of the Delaware beaches may put the native plants at risk. Scudlark, for example, remembers that one of her favorite beach plum trees disappeared when the cottage nearby was torn down and replaced with a larger, more modern home.

But there’s good news: Many beach plums remain in protected areas along the coast.

So, even though the unique fruit can be fickle and difficult to cultivate, it has already endured countless generations and promises to continue to be a source of sweet memories for more to come.