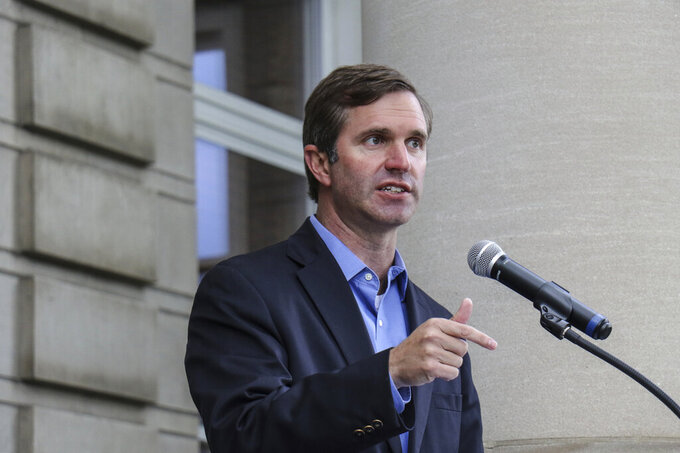 The Democratic governor recounted meeting Kentuckians who for the first time will have access to clean drinking water from their home taps, thanks to projects backed by the federal assistance. Wastewater projects will attract companies and jobs to industrial sites, he said, while homes blacked out from the internet will someday tap into wireless service thanks to federal help.

“Everything in (Washington) D.C. gets caught up in Democrat or Republican, red or blue,” Beshear told The Associated Press in an interview conducted over Zoom. “And the right way to see this is: Clean drinking water isn’t red or blue, it’s a basic human right. The infrastructure that allows for that next great employer to come, a good job, isn’t red or blue. It’s just good for our families.”

Beshear and Republican lawmakers clashed frequently during his first two years as governor, but they agreed on spending more than $1 billion of Kentucky’s allotment of federal pandemic aid earlier this year. Beshear said Monday that Kentucky still has another $1.1 billion to allocate from the aid package known as the American Rescue Plan.

The governor reiterated that he will propose using $400 million of federal aid to provide bonuses for frontline workers in Kentucky who stayed on the job throughout the pandemic.

Kentucky this year earmarked hundreds of millions of federal dollars for use on broadband and water and wastewater projects. Those building blocks will help meet basic human needs and position the Bluegrass State for more economic growth, the governor said.

The momentum of recent successes shows Kentucky is going from being “a flyover state” to a destination for economic growth, Beshear said.

Despite the ongoing COVID-19 pandemic, Beshear's administration says Kentucky has registered its best year for economic development growth, exceeding $10 billion in private-sector investments — led by the decision by Ford Motor Co. and its battery partner to build twin battery plants at Glendale, Kentucky.

As a Democrat in a bright red state, Beshear stressed bipartisan cooperation in doling out federal aid and setting spending priorities on education, health care, economic development and human services. The state is also sitting on a massive surplus heading into the 2022 legislative session, when the Republican-dominated legislature will pass the next state budget.

It creates more opportunities for transformational changes, he said.

“Our job in government, once elected, shouldn’t be trying to move this state to the right or to the left, but just to move it forward,” the governor said. “We are sitting at a once-in-a-generation opportunity to push Kentucky forward economically in education, in health care, in ways that we’d always dreamed of. We cannot fumble this opportunity through partisan rancor. It’s time to put our potential progress over party and certainly our people over politics.”

The federal aid already allocated will support projects benefiting every part of Kentucky, but extra attention will be given to rural and urban areas that traditionally were overlooked, the governor said.

“If we are at the cusp of a new era of prosperity, and I believe we are, we've got to make sure everybody’s included,” he said. "That’s parts of eastern Kentucky and western Kentucky that are far too often left out. It’s certain neighborhoods in Lexington and Louisville that are far too often left out. So you do see some intentionality there in making sure that we’re lifting everybody up.”

Pockets of Kentucky are plagued by some of the nation's highest poverty rates, leaving some residents lacking basic services that most Americans take for granted.

One recently announced project backed by the federal aid will provide potable water service to about 125 eastern Kentucky residents who didn't previously have access, Beshear's office said. Another project in western Kentucky will deliver running water to several homes for the first time.

“I’ve had the blessing of being able to present those dollars and meet and hug families that have never had clean drinking water in their homes,” Beshear said Monday.