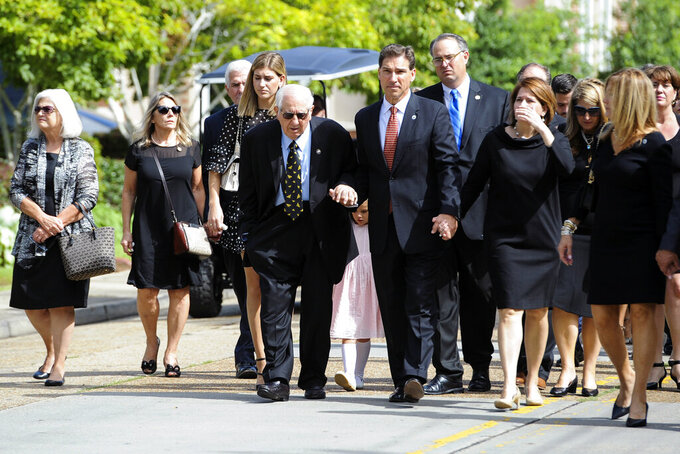 Brad Kemp, ASSOCIATED PRESS
FILE - Raymond Blanco, center left, walks with family from the Cateral Hall to the Reflections and Mass of Christian Burial for Gov. Kathleen Blanco at The Cathedral of St. John the Evangelist on Aug. 24, 2019, in Lafayette, La. Raymond Blanco, a former coach, longtime academic administrator at the University of Louisiana at Lafayette and husband to the state’s first female governor, died Saturday, Nov. 19, 2022, at 87 years old. (Brad Kemp/The Advocate via AP, File)

BATON ROUGE, La. (AP) — Raymond Blanco, a former coach, longtime academic administrator at the University of Louisiana at Lafayette and husband to the state’s first female governor, has died. He was 87.

He worked at the university for 46 years in various roles including as assistant football coach, dean of students and vice president for student affairs before retiring in 2009. He was referred to by many as “Coach.”

In 2004 he became the state's first first gentleman when his wife, Kathleen Babineaux Blanco, began her four-year term as governor. She was in office when Hurricanes Katrina and Rita devastated Louisiana in 2005, and she died of cancer in 2019.

The two were married 54 years and had six children.

“While this is a great loss for our state, we can be comforted in knowing that Coach is once again reunited with his best friend and soulmate, as well as their son Ben,” current Gov. John Bel Edwards said in a statement.

Edwards said Blanco made a lasting impression and was a proponent of social justice and educational opportunities for all.

“A legend in his own right, Coach led countless teams to victory before moving to an administrative role at his beloved University of Louisiana at Lafayette. His love for this state and devotion to his wife and family were effervescent,” the governor said. “I will forever cherish his quick wit and sage counsel — as well as his recipe for the perfect Old Fashioned.”