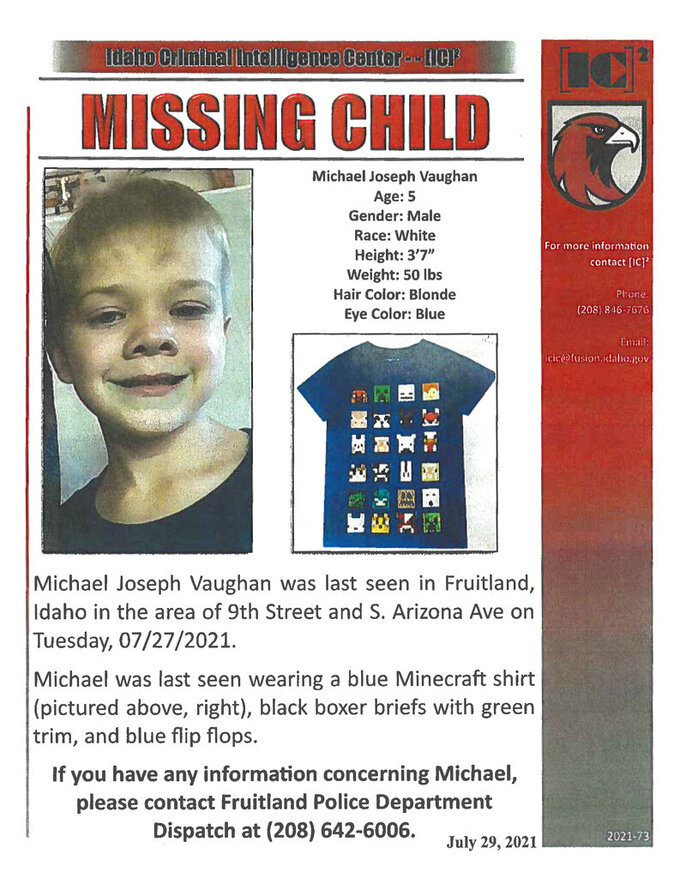 Uncredited, ASSOCIATED PRESS
FILE - This Missing Child poster, provided by the Fruitland, Idaho, Police Department, shows Michael Joseph Vaughan who has been missing since July 27, 2021. Police in southwestern Idaho said Thursday, Dec. 1, 2022, they believe they have found the place where the body of a missing 5-year-old boy was temporarily buried, but they still haven't found little Michael Vaughan's remains. The boy, nicknamed "Monkey," disappeared while playing outside his home in the small town of Fruitland nearly a year and a half ago. (Fruitland Police Department via AP, File)

BOISE, Idaho (AP) — Police in southwestern Idaho say they believe they have found the place where the body of a missing 5-year-old boy was temporarily buried, but they still haven't found his remains.

Michael Vaughan, nicknamed “Monkey,” disappeared while playing outside his home in the small town of Fruitland nearly a year and a half ago. Police and other law enforcement agencies searched the region extensively for months, but no sign of the child was found.

In November, however, search efforts intensified after investigators received a credible tip involving a home roughly a half-mile away from Vaughan’s house.

During a press conference on Thursday, Fruitland Police Chief J.D. Huff said investigators now believe Vaughan was abducted, died, and that his remains were later moved to a new location.

“We strongly believe based on evidence that Michael was abducted and is deceased and that his remains were buried and later moved from the property,” Huff said. “As of today the whereabouts of his remains is unknown.”

The new search involved ground-penetrating radar, trained search dogs and excavators. Officers spent days searching the home and digging up and sifting through more than 250 cubic yards of dirt from the yard.

Before the excavation began, radar detected “anomalies” in the backyard, Huff said. Several certified human remains detection dogs were also brought in, he said, “all of them alerting to the presence of human remains.”

Police recovered additional evidence from the home, but Huff wouldn't describe that evidence. He said investigators believe the Wondras were involved in Vaughan's abduction. Huff said there is no connection between the Wondras and the Vaughan family.

Sarah Wondra, 35, was arrested last month and charged with failing or delaying notification of a death. She has not yet entered a plea, however. A judge recently ruled that she was not competent to assist in her own defense and ordered that Wondra be sent to a behavioral health center for treatment. She is expected to be reevaluated after 90 days.

Huff said Stacey Wondra is currently being held in jail on unrelated charges, but online jail records did not reveal the nature of those charges. His attorney, Rondee Blessing, declined to comment on the matter.