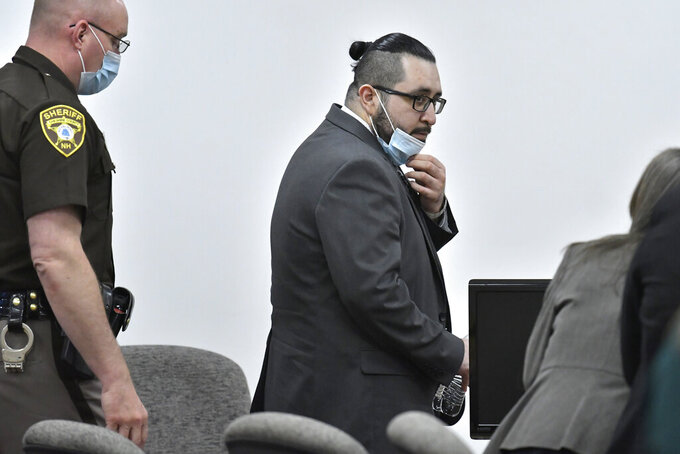 Josh Reynolds, ASSOCIATED PRESS
Armando Barron is lead out of the courtroom following the first day of his trial at Cheshire County Superior Court, Tuesday May 17, 2022 in Keene, N.H. Barron, who plead not guilty, is on trial on charges of killing his wife's male co-worker after he discovered they were texting, and then forcing her to behead him after she drove with the body for 200 miles to a remote campsite. (AP Photo/Josh Reynolds, Pool)

CONCORD, N.H. (AP) — A New Hampshire man who was killed, allegedly by a female coworker's husband who discovered they had been texting, had other gunshot wounds, cuts and bruises before he died of a bullet to the head, the state's chief medical examiner testified Monday.

“It's very likely he was immediately unconscious at this point and would have died within minutes," Jennie Duval said about the last bullet that went into Jonathan Amerault, 25, who was killed in September 2020 and later beheaded. His other injuries had caused a lot of bleeding and pain, she said.

Amerault's head was cut off using two weapons, likely a saw and a knife, Duval testified during the first-degree murder trial of Armando Barron, 32, in Keene.

Prosecutors allege that Barron assaulted his wife and used her cellphone to lure Amerault to a park just north of the Massachusetts state line the night he discovered the texts, beat and kicked Amerault, and tried to force his wife to shoot him. She refused, and he eventually forced Amerault into the victim’s car and shot him three times, prosecutors said.

His wife, Britany Barron, testified last week that she was then forced to drive the car 200 miles (322 kilometers) north to a remote campsite. There, she said, she was forced to behead Amerault and dispose of his body.

Amerault had wounds from two bullets to his legs and arms, and one to his head, that were not considered lethal. Those two bullets likely exited and reentered his body, Duval testified. It's possible he might have been positioned on his side at the time, bent at the waist and knees, she said in response to a prosecutor's questions.

Bruises on Amerault's forehead and cheek were in a zigzag pattern, Duval testified, adding that “they look very much like footwear impressions."

Duval was questioned by the defense about another part of her autopsy, in which she examined some of Amerault's tissues under a microscope after they were prepared by a lab.

Duval confirmed that her exam showed the presence of cells that would have responded immediately to heal Amerault's wounds, followed by a second wave of longer-lasting cells that target healing.

She was asked by attorneys if it was possible if several hours had passed since Amerault had received some of his injuries, and Duval said that it was but that she could not give an exact time line.

Both sides questioned Duval about specific injuries to Amerault's neck. Britany Barron, who asked that lawyers use her unmarried name, Mitchell, had earlier testified that her husband made her stand on his neck and slit his wrists.

In other testimony, a state firearms expert testified Monday that two of the bullets came from Armando Barron’s revolver, but that the results were inconclusive for the third bullet, which was recovered from inside Amerault's skull. An investigator in charge of fingerprint analysis said an examination of the revolver did not show any viable prints, saying the ribbed surface of the grip area would make it difficult “to lay a suitable impression down on that surface."

Armando Barron pleaded not guilty to first-degree murder, kidnapping and other charges. His lawyers argue that his wife shot Amerault, which she denies.

Britany pleaded guilty last year to three counts of falsifying evidence and was released from jail on parole last month. She apologized to Amerault’s family during her sentencing.

The Associated Press had not been naming the couple in order not to identify Britany Barron, who said she suffered extreme abuse. Through her lawyer, she recently agreed to the use of her name.

This story has been corrected to show that a firearms expert testified that only two of the bullets were determined to be from the revolver, and that results were inconclusive for the third bullet.