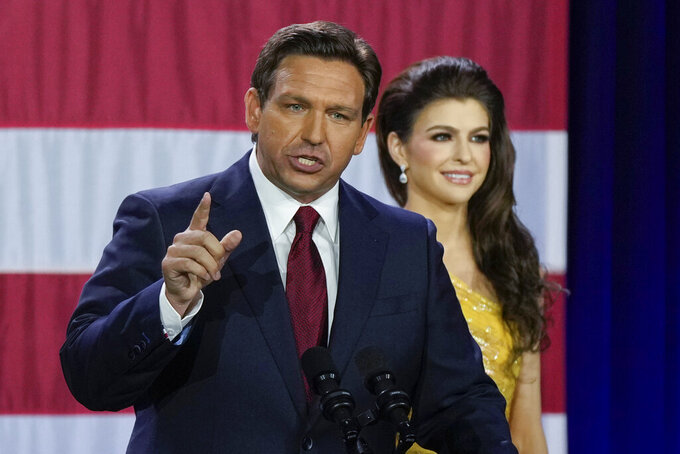 The law prohibits teaching or business practices that contend members of one ethnic group are inherently racist and should feel guilt for past actions committed by others. It also bars the notion that a person’s status as privileged or oppressed is necessarily determined by their race or gender, or that discrimination is acceptable to achieve diversity.

"Our professors are critical to a healthy democracy, and the State of Florida’s decision to choose which viewpoints are worthy of illumination and which must remain in the shadows has implications for us all," Walker wrote. "If our ‘priests of democracy’ are not allowed to shed light on challenging ideas, then democracy will die in darkness.

The ruling is at least a temporary setback to the powerful Republican governor's agenda to combat what he describes as the “woke ideology” of liberals and critical race theory, a way of thinking about America’s history through the lens of racism. DeSantis won a landslide reelection to a second term this month after a campaign that focused heavily on cultural issues.

The governor has often said rulings that halt his legislative priorities are likely to be reversed by appeals courts in Florida that are generally more conservative. A spokesman for DeSantis said they would appeal the ruling.

“The Stop W.O.K.E. Act protects the open exchange of ideas by prohibiting teachers or employers who hold agency over others from forcing discriminatory concepts on students as part of classroom instruction or on employees as a condition of maintaining employment,” said Bryan Griffin, DeSantis' press secretary.

In his lengthy ruling, Walker quoted from George Orwell's dystopian novel “1984,” writing “'It was a bright cold day in April, and the clocks were striking thirteen,' and the powers in charge of Florida’s public university system have declared the State has unfettered authority to muzzle its professors in the name of ‘freedom.'"

Judge Walker in August issued a similar ruling on the law that blocked it from taking effect in businesses. The law is also subject to another legal challenge from a group of K-12 teachers and a student.

The governor began pushing for the law late last year and the Republican-controlled Legislature passed it during the 2022 legislative session.

“What you see now with the rise of this woke ideology is an attempt to really delegitimize our history and to delegitimize our institutions and I view the wokeness as a form of cultural Marxism,” DeSantis said when first floating the legislation. “They really want to tear at the fabric of our society.”

Critical race theory was developed during the 1970s and 1980s in response to what scholars viewed as a lack of racial progress following the civil rights legislation of the 1960s. It centers on the idea that racism is systemic in the nation’s institutions and that they function to maintain the dominance of white people in society.