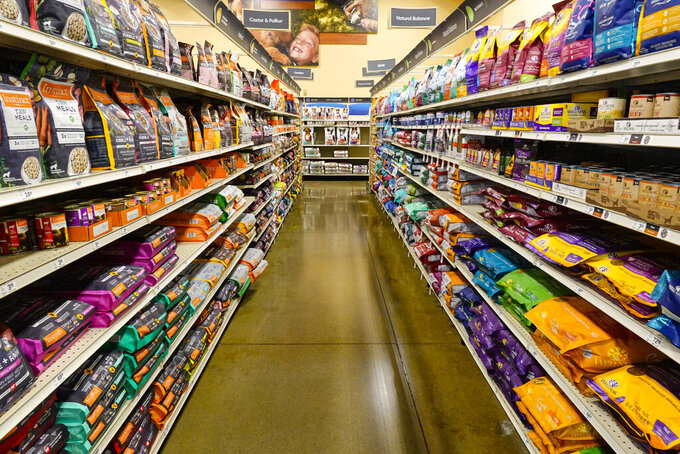 Michael Conroy, ASSOCIATED PRESS
Dog food is shown in a pet store in Westfield, Ind., Tuesday, July 19, 2022. In 2018, the FDA began investigating whether the increasing popularity of grain-free dog foods had led to a sudden rise in a potentially fatal heart disease in dogs. Four years later, the FDA has reached no conclusion, but the publicity surrounding the issue has shrunk the once-promising market for grain-free dog foods. (AP Photo/Michael Conroy)

In 2018, the U.S. Food and Drug Administration, acting on input from a group of veterinary researchers, began investigating whether the increasing popularity of grain-free dog foods had led to a sudden rise in a potentially fatal heart disease in dogs, dilated cardiomyopathy.

Four years later, the FDA has found no firm link between diet and dilated cardiomyopathy. Nor has it rejected such a link, and research is ongoing. Publicity surrounding this issue, nevertheless, has shrunk the once-promising market for grain-free dog foods.

Furthermore, a tangled web of industry funding and interests appears to have influenced the origin, data collection, and course of the FDA study, according to internal FDA records.

A six-month investigation by 100Reporters has found that veterinarians who prompted the FDA to consider diet have financial and other ties to the leading sellers of grain-inclusive pet foods. Additionally, agency records show that for the initial study, some vets were instructed to submit only dilated cardiomyopathy (DCM) cases that implicated grain-free, “exotic” or “boutique” pet foods. Suppliers of ingredients used in grain-free dog foods have also exerted pressure on the FDA to protect their market.

Consequently, the conversation around DCM and grain-free food is deeply divided, with each side claiming the other is prioritizing industry relationships over scientific integrity and the lives of pets.

“This became such an emotional issue,” said Dana Brooks, CEO of the Pet Food Institute, whose members produce most pet foods in the US. “We’re scrambling to try to even determine what’s going on.”

Until 2017, the FDA saw one to three reports of DCM annually. But between January 1 and July 10, 2018, it received 25 cases. Seven reports came from a single source, animal nutritionist Lisa Freeman from Tufts University’s Cummings School of Veterinary Medicine, an FDA spokesperson said. FDA records obtained under the Freedom of Information Act, however, indicate those reports may not have been fully representative of cases seen at the Tufts clinic.

In a June 2018 email to FDA veterinary medical officer Jennifer Jones, Freeman attached a document instructing vets to report cases to the FDA, “If patient is eating any diet besides those made by well-known, reputable companies or if eating a boutique, exotic ingredient, or grain-free (BEG) diet.”

When asked if this could be perceived as cherry-picking data that would shape the inquiry, Freeman stated through Tufts media relations: “The protocol in that email was developed for and intended to help veterinary cardiologists in the early stages of the investigation into potential associations between diet and dilated cardiomyopathy.”

“I shared the protocol with the FDA to inform them of what our clinical recommendations for patients were at that time,” Freeman wrote, noting they’re “continuing to study” any diet with ingredients linked to DCM “regardless of manufacturer.”

In an email, an FDA spokesperson wrote, “The FDA has never requested that DCM cases reported to the agency be limited to certain diet types. We welcome all DCM reports with a suspected link to food, regardless of the type of diet.”

Industry funding is common in animal nutrition science. Freeman said she stands behind her research and has “ transparently disclosed the sources of funding for the work I conduct on this topic.”

Emails from a public records request indicate that in April 2018, Jones spoke with Freeman, Stern and Adin about grain-free dog foods and DCM and requested spreadsheets of their clinical case data.

Adin has been involved in studies that received funding from Purina since 2018 and, since 2017, from the Morris Animal Foundation, a nonprofit animal health charity founded by Mark Morris Sr., who created the first line of dog foods produced by the company that would become Hill’s Pet Nutrition.

University of Florida’s public relations said neither Adin nor the university received direct financial support from the companies for these studies.

Stern has authored studies funded by the Morris Animal Foundation since 2011, and currently receives funding from the foundation.

In July 2018, the FDA announced its investigation, noting many of the 25 dogs diagnosed lacked a genetic predisposition to DCM. The common thread, it said, appeared to be a grain-free diet.

A year later, the FDA took the unusual step of naming 16 dog foods, nearly all grain-free, that appeared most frequently in their DCM case reports. “We’ve never seen anything like that before without a certainty of the cause,” said Brooks.

Joseph Bartges, professor of animal nutrition at the University of Georgia, wasn’t surprised, noting the FDA flagged grain-free food early on. “When you only look for what you want to see, you only see what you look for,” Bartges said. By July 2020, reports of DCM numbered 1,100 — likely resulting from the FDA encouraging people to report the disease," said Brooks.

Suppliers of ingredients for grain-free foods, in turn, marshaled forces to protect their market share.

In its 2019 annual report, the USA Dry Pea & Lentil Council said it “convinced the FDA to clarify their language about their concerns and minimize the damage to the industry.”

In a 2019 letter to FDA officials, Sen. Jon Tester from Montana — a principal growing region for pulses— complained the agency’s “unsubstantiated warning” had hurt pulse farmers. The following year, seven senators signed another letter to the FDA flagging potential “bias about causation of this disease.”

The FDA has continuously stated that DCM involves multiple factors. Shortly after that letter, Steven Solomon, director of the FDA’s Center for Veterinary Medicine (CVM), emphasized this point, describing DCM as “a scientifically complex, multifaceted issue,” adding that “we . . . currently do not view this as a regulatory issue.”

An FDA spokesperson wrote that while it met with stakeholders, “Ultimately, all FDA decisions and work are guided by science, data, and our public health mission.”

Getting an answer about DCM will be difficult thanks to the complexity of the science and industry influence, said Marion Nestle, author of Pet Food Politics. “They’re all trying to protect their market share.”

This article is an abridged version of an investigation produced by 100Reporters, a nonprofit investigative news organization, with financial support from the Fund for Investigative Journalism and legal guidance from the Reporters Committee for Freedom of the Press.

This story was first published on July 20, 2022. It was updated on July 23, 2022 to correct that the founder of the Morris Animal Foundation created the first line of dog foods produced by the company that would become Hill’s Pet Nutrition, but did not start the company; and to remove an erroneous reference to the foundation being chaired by a Hill’s Pet Nutrition employee; it is not.