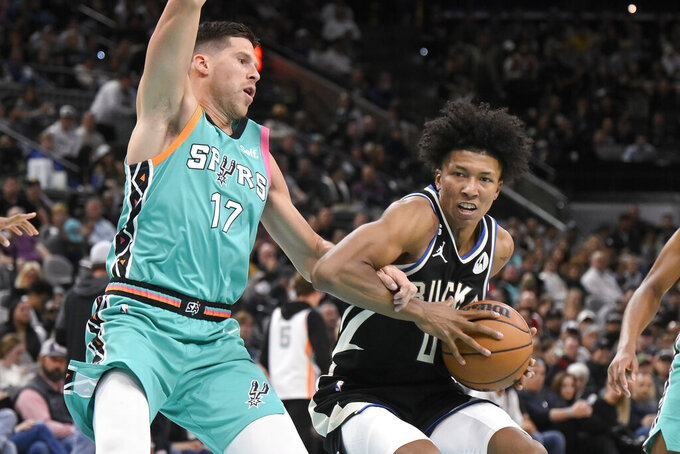 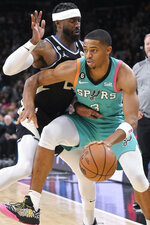 “We loved the win,” San Antonio coach Gregg Popovich said. “It was great. Our guys played great. Of course, they were undermanned like crazy, but you go out and you play whoever is out there. They came to win, (they are) deep, obviously well-coached. They got a great shot to go get this thing done (and win a championship).”

Jevon Carter scored 21 points for the Bucks, and Brook Lopez had 19. Bobby Portis finished with 16 points and 12 rebounds.

Milwaukee shot a season-low 33 percent from the field, which Popovich attributed to good defense and a depleted opponent.

Milwaukee fell behind 75-54 midway through the third quarter.

“When we were down 21, that’s when you’re like, ‘Maybe tonight is just going to be an ugly night,’” Bucks coach Mike Budenholzer said.

San Antonio dominated the paint early with Antetokounmpo sidelined for the second straight game with a sore left knee. In the first half, the Spurs had a 28-8 advantage in the paint and had nine blocks while the Bucks only had two.

“We knew they were going to come out, they still have good players," Johnson said. "They won a championship. We knew they know how to win, so we knew if we came out lackadaisical that it could be a long night for us.”

Allen was listed in the starting lineup by the public address announcer but was scratched due to a non-COVID-19 illness.

Budenholzer learned Allen was unable to play 30 seconds before tipoff.

“Grayson just had a stomach thing,” Budenholzer said. “I saw him leave. I just thought sometimes guys leave for the locker room for a quick second before jump ball. Obviously, it was more than that.”

Spurs reserve center Charles Bassey had a career-high 14 rebounds. He also matched a career high with four blocks to go along with five points in 18 minutes.

The Spurs signed Bassey after the Philadelphia 76ers waived him Oct. 13.

Bucks: Holiday (sprained right ankle), Middleton (left wrist ligament surgery), Connaughton (strained right calf), Ingle (left knee ACL surgery) and Green (nasal fracture surgery) all sat out due to injuries. ... G Justin Nwora made his first start of the season in place of Allen. ... Budenholzer and the Bucks were puzzled by a delay of game call that resulted in a technical foul with 2.5 seconds left in the opening quarter. A ball was bounced by an official following the second of George Hill’s free throws, but it did not appear intentional.

Spurs: Johnson has a 3-pointer in 29 straight games, the second-longest streak in franchise history behind Danny Green’s 32 straight in 2012. Chuck Person had 28 straight in 1996. ... F Jeremy Sochan dyed his hair pink to match the trim on the Spurs’ City Edition uniforms, which paid tribute to the franchise hosting the 1996 NBA All-Star Game at the Alamodome. ... Former Spurs F Paul Pressey was in attendance and honored by the team between the opening quarters as part of the team’s 50th anniversary celebration. Pressey played for San Antonio in 1990 and ’91 as part of his 11-year NBA career.

Spurs: At Golden State on Monday.