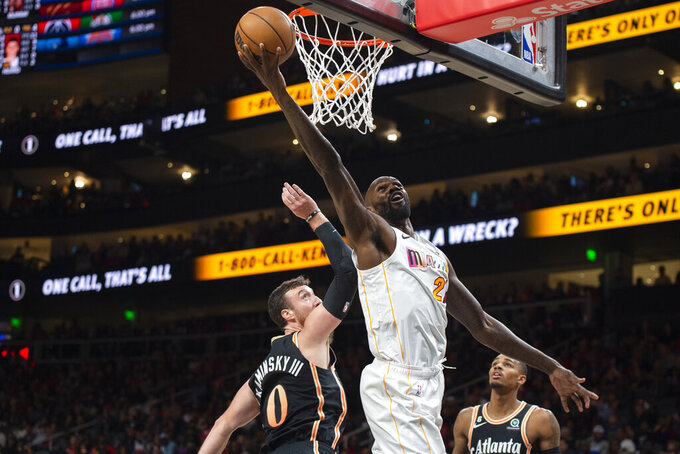 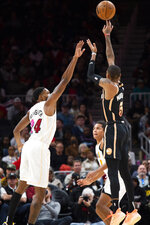 ATLANTA (AP) — Bam Adebayo scored 14 of his 32 points in the third quarter, Caleb Martin added 20 points and the Miami Heat snapped a seven-game road losing streak with a 106-98 victory over the Atlanta Hawks on Sunday night.

“It was gutty, it was gutty,” Lowry said about the win. “We held a team like that with two superstar players in Trae (Young) and Dejounte (Murray) to under 100 points. It shows a lot from this team. Tyler stepping up and Bam having another effective offensive night and Caleb Martin. He’s been doing it for us. Just continuing to get better and better.”

“They just made us shoot 3s,” Young said after the Hawks went 10 for 36 beyond the arc. “We haven’t been shooting good all year from the 3-point line, so you have to give credit to them and tip your cap to their game plan.”

Adebayo, coming off a 38-point performance in a win over Washington on Friday, went 13 for 20 from the field as Miami, which improved to 2-7 on the road, won its third straight.

The Hawks were helpless to stop Adebayo’s lob game with Herro.

Miami listed 11 of its 16 players on the injury report before the game but overcame the potential setbacks by clogging Atlanta’s passing lanes and outscoring the Hawks 58-34 in the paint.

De’Andre Hunter’s left corner 3 for Atlanta gave made it 25-15 for the game’s first double-digit lead. Hunter scored 14 in the first half, Young had 13 and John Collins 11 as the Hawks led 60-51 at intermission. Strus and Adebayo each scored 14 for Miami.

Hawks: C Clint Capela, the league’s third-leading rebounder, missed the game with dental pain. He ranks seventh in field-goal percentage and ninth in blocked shots. ... Dating back to March 3, 2022, Atlanta had scored at least 100 points in 40 straight games, the third-longest streak in franchise history and the longest active streak in the NBA.

Heat: At Boston on Wednesday night.

Hawks: At Philadelphia on Monday night.