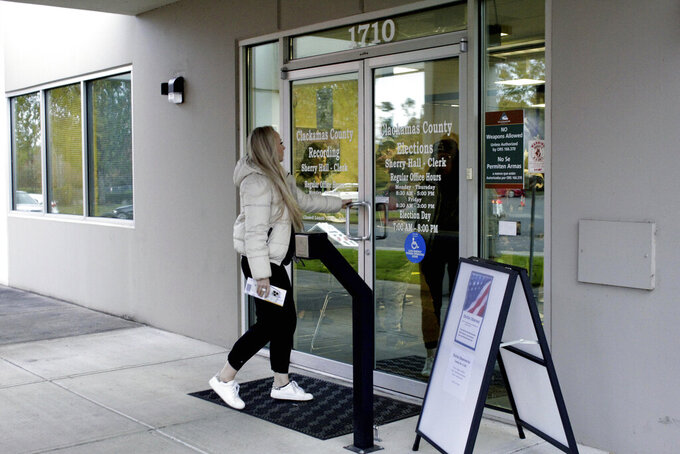 Gillian Flaccus, ASSOCIATED PRESS
Voters in Clackamas County, Ore., cast ballots just a few hours before the 8 p.m. deadline at the elections offices in Oregon City, Ore., on Nov. 8, 2022. A large part of the county is in Oregon's newly redrawn 5th Congressional District, where Republican Lori Chavez-DeRemer and Democrat Jamie McLeod-Skinner are in a neck-and-neck race for an open seat that's been targeted by the GOP. Voters there said gas prices and inflation were their top concerns. (AP Photo/Gillian Flaccus)

With roughly 40% of the vote counted in the vote-by-mail state, the outcomes of both races were too early to call.

Measure 114 would require residents to obtain a permit to purchase a gun, ban large-capacity magazines over 10 rounds except in some circumstances and create a statewide firearms database.

To qualify for a permit, an applicant would need to complete an approved, in-person firearm safety course, pay a fee, provide personal information, submit to fingerprinting and photographing and pass a federal criminal background check. The permits would be processed by local police chiefs, county sheriffs or their designees.

The ban on large-capacity magazines would not apply to current owners, law enforcement or the military.

Proponents of the measure say it would reduce suicides — which account for 82% of gun deaths in the state — mass shootings and other gun violence.

Opponents, including the left-wing Socialist Rifle Association, say it would infringe on constitutionally protected rights and could reduce gun access among marginalized communities and people of color if law enforcement agencies are the arbiters of the permitting process. The permitting fee and cost of the firearms course could also be barriers to access, they say.

“We began this historic campaign to save lives with faith and we remain hopeful as we wait for all of the votes to be counted,” Mark Knutson, chair of Lift Every Voice Oregon, the yes on Measure 114 campaign, said in a statement late Tuesday.

The health care proposal, Measure 111, would make Oregon the first state in the nation to amend its constitution to explicitly declare affordable health care a fundamental human right.

The proposed amendment reads: “It is the obligation of the state to ensure that every resident of Oregon has access to cost-effective, clinically appropriate and affordable health care as a fundamental right.”

It does not define “cost-effective, clinically appropriate and affordable,” nor does it say who would foot the bill.

The Oregon Health Authority says 94% of Oregonians currently have insurance coverage and more are eligible for the Oregon Medicaid plan or a subsidy to reduce the cost of commercial insurance.

Opponents say the amendment could trigger legal and political challenges if it passes.