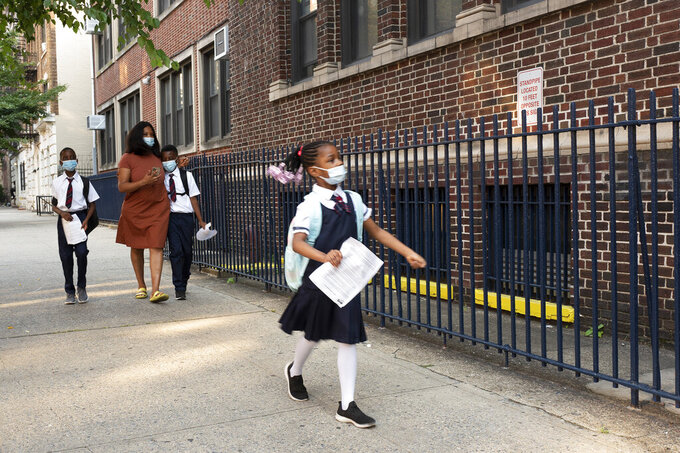 Mark Lennihan, ASSOCIATED PRESS
A girl leads her mother and brothers as they arrive at Brooklyn's PS 245, Monday, Sept. 13, 2021, in New York. Classroom doors are swinging open for about a million New York City public school students in the nation's largest experiment of in-person learning during the coronavirus pandemic. (AP Photo/Mark Lennihan)

New York City Mayor Bill de Blasio made the announcement Monday, a day after the city’s teachers’ union sent de Blasio a letter calling for weekly testing instead of biweekly testing in the district with about a million students.

The mayor also announced also a change in quarantine rules for schools, no longer requiring unvaccinated students to quarantine at home if they were masked and at least 3 feet away from someone who tested positive for the coronavirus.

The changes come after the first full week of the school year in which nearly 900 classrooms, including those in charter schools, were fully or partially closed in the city’s 1,876 schools because of reports positive COVID-19 cases. One school entirely closed for 10 days after a cluster of cases.

The new rules take effect on Sept. 27. That day is also the deadline for the city’s public school teachers and staff to get at least their first shot of the COVID-19 vaccine under a city-wide schools mandate.

The United Federation of Teachers, the union representing about 75,000 New York City teachers, commended the mayor's decision to move to weekly testing but disagreed with the decision to limit which students need to quarantine. The union's president Michael Mulgrew called the decision “ill-considered” because children don't always keep their distance and wear the masks correctly all day long.

The city’s mandate that teachers and staff get vaccinated is relatively rare in the U.S. Other states and districts have imposed rules requiring vaccines or weekly tests for the virus.

Unlike other school districts, New York City is not offering any remote instruction this school year, despite concerns about the highly contagious delta variant’s ability to spread. De Blasio has said children need to be back in school for their mental and physical health and social development.

New York is also requiring vaccinations for student-athletes and coaches in “high risk” sports like football, basketball and wrestling. De Blasio said Monday that he’s not yet considering a broader vaccine requirement for all eligible students, despite Pfizer's announcement Monday that its COVID-19 vaccine works for children ages 5 to 11 and that it will seek U.S. authorization for that age group.

“The goal is to get our kids in school for the foreseeable future. The best way to do that is to welcome all kids while constantly working to improve the levels of vaccination," he said. “I do not want to see kids excluded. I want to invite kids in and then constantly work to get them vaccinated.”