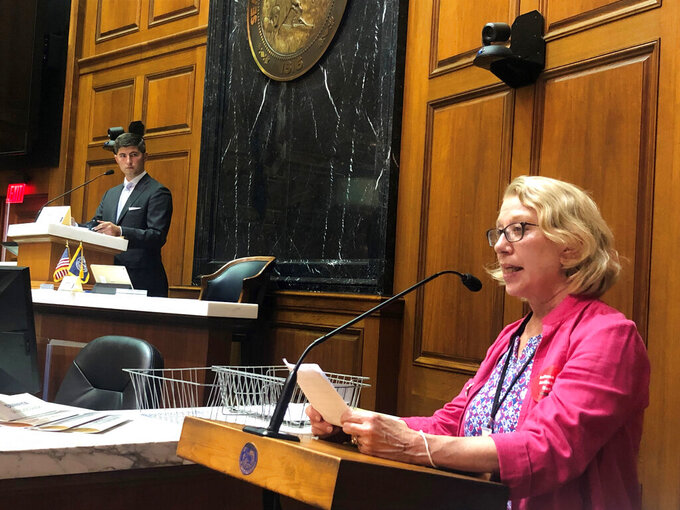 The big question is whether they will focus on shoring up the suburban Indianapolis district that U.S. Rep. Victoria Spartz narrowly kept in Republican hands last year to maintain their 7-2 control of Indiana’s U.S. House delegation.

A more aggressive approach could see them try to carve up the northwestern Indiana district now held by U.S. Rep. Frank Mrvan with the aim of ending Democrats’ decadeslong dominance there and gaining another GOP seat as Republicans look to regain U.S. House control in the 2022 midterm elections.

Republicans have commanding majorities in both the Indiana House and Senate, giving them full control of the once-a-decade redistricting process under which new congressional and legislative districts are decided based on 2020 census data.

They are slated to release on Tuesday proposed congressional and Indiana House maps drawn behind closed doors, with a timeline for final approval in about three weeks. Democrats and voting-right activists criticize that fast-tracked process as giving the public little time to study and comment on the new maps and question the move by legislative Republicans to hire a high-priced legal consultant from Washington.

Indiana is keeping its nine U.S. House seats, while Illinois, Michigan and Ohio are all losing a seat starting with next year’s election.

But there will be plenty of reshuffling of Indiana’s district maps as more than half of the state’s 92 counties lost residents over the past decade, and Indianapolis and its surrounding counties saw about three-quarters of Indiana’s population growth.

A possible scenario is shifting the northern tier of Marion County from Spartz’s district to Carson to boost her reelection prospects as Democratic candidate Christina Hale won 63% of that area’s vote in last year’s election. Spartz, however, received 55% of the vote in the rest of the district that includes fast-growing Hamilton County to win the election by an overall 50%-46% margin over Hale.

There are plenty of Republican-friendly voters to spare as Indiana’s other six GOP House members all won their 2020 elections with at least 61% of the vote.

“I think that the bulk of the city of Indianapolis population is going to likely be in one district,” said Carol Rogers, who analyzes census data as co-director of Indiana University’s Indiana Business Research Center. “So, the surrounding counties could wind up being carved up among two or three or maybe even four congressional districts.”

State Republicans have given little sign of their redistricting inclinations other than saying that they will follow federal law, along with aiming to keep the new districts compact while avoiding splitting communities between districts.

Republican map drawers would likely have to split up cities along and near Indiana’s Lake Michigan shoreline if they wanted to soften up the longtime Democratic hold on the 1st District for a possible GOP capture. Republicans haven’t mounted a serious challenge for the seat in decades, but with Mrvan having just won his first term in 2020 now might be their chance.

National Republicans would certainly like an opportunity to gain an Indiana seat although such a move could weaken the GOP's strength in other districts, said Mike Murphy, a former Republican state lawmaker and Marion County GOP chairman.

“I would advise against it because there is a distinct temptation in politics when you get the power to get too greedy,” Murphy said.

Democrats and voting-rights activists have protested the move by Indiana House Republicans to hire Washington-based attorney Jason Torchinsky as a $1,300-an-hour legal adviser on the redistricting process. They point to his work defending Republican-drawn maps in other states and with GOP-oriented redistricting advocacy groups such as the National Republican Redistricting Trust and the Fair Lines America Foundation.

Republican state Rep. Tim Wesco of Osceola, chairman of the House elections committee, defended the hiring as a necessary protection.

“Federal law is extremely complex, and we have to be very careful on how we go through that process and make sure that we do it right and do it legally,” Wesco said.

Legislative Republicans held nine public redistricting hearings around the state last month without any proposed maps for review. The only hearings planned with the maps in hand will start the day after they are released on Tuesday and will only be held on weekdays at the Statehouse in Indianapolis.

Vaughn and other activists have unsuccessfully pushed for more hearings outside Indianapolis, arguing for more than the bare minimum required by law.

“People can see, they can feel their democracy slipping away,” Vaughn said. “They are looking for you to save it.”