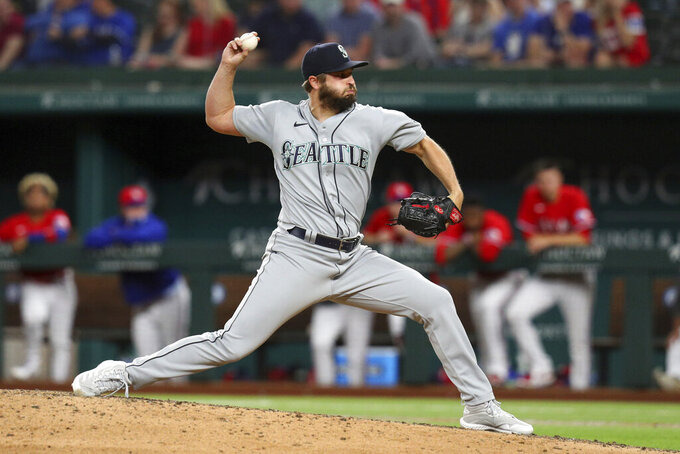 All that homework led him to the Chicago White Sox.

Graveman agreed to a $24 million, three-year contract with Chicago on Tuesday, giving the White Sox additional flexibility with their bullpen.

The 30-year-old Graveman is expected to pitch in front of Hendriks, who had 38 saves and a 2.54 ERA in his first season with Chicago. The defending AL Central champions also have Craig Kimbrel, but he could be on the move after he faltered in a setup role with the White Sox.

Chicago also brought back veteran utilityman Leury García with a three-year contract. The 30-year-old García batted .267 with five homers and a career-high 54 RBIs in 126 games this season.

A person with direct knowledge of the contract confirmed García's deal to The Associated Press on condition of anonymity because it hadn't been finalized.

The White Sox have an opening at second base after trading Nick Madrigal to the Cubs in the Kimbrel deal in July, and García could get the job if the team isn't able to bring in a better alternative.

MLB Network was the first to report García's deal.

General manager Rick Hahn got the contracts for Graveman and García in place right before what likely will be Major League Baseball’s first work stoppage since 1995. The five-year collective bargaining agreement expires at 11:59 p.m. EST Wednesday, and owners are expected to lock out the players if the sides can’t reach a new labor deal in time.

“I thought personally that if the right opportunity presented itself before (Dec. 1 or Dec. 2), whatever the timeframe is, that we should take it,” Graveman said, “and I thought this was a very good (deal).”

After beginning his career as a starter, Graveman flourished while working out of the bullpen this year. He went 5-1 with a 1.77 ERA and his first 10 career saves in 53 games with Seattle and Houston.

“I am trying to get three outs or four outs or five outs whenever my name is called,” Graveman said, “and I have no ego in this game. I (couldn't) care less about personal stats. I want to help the baseball team win.”

Graveman, who gets $8 million annually, said Chicago reached out right after he became a free agent and kept up its pursuit all the way until he agreed to terms. He said his conversations with Lynn, Keuchel and Hendriks helped close the deal for the White Sox.

“It's been a young team for a long time, but now guys that have families that are there are showing that the organization is putting emphasis in making sure that the families are taken care of,” Graveman said. “Which I think is huge for myself. I have a wife and two young daughters that will be going with me.”

Graveman made his major league debut with Toronto in 2014, but he appeared in just five games before he was traded to Oakland in a multiplayer deal for Josh Donaldson. Graveman pitched his only career shutout in the A's 9-0 victory at the White Sox on Aug. 19, 2016.

He was Oakland's opening-day starter in 2018, but his season was cut short by reconstructive elbow surgery. He returned to the majors last year with Seattle and had a 3.60 ERA in nine relief appearances in September, setting the stage for his breakout performance in 2021.

“Kendall is a veteran who provides us with end-of-game bullpen depth and an ability to induce ground balls,” Hahn said in a release. “He’s a high-character guy and a great teammate who will fit well within our clubhouse and bullpen.”

“I learned that every out is magnified in the postseason. I learned that there's no need to panic,” Graveman said. “I think that a young team has a tendency to, even when their back's against the wall or you're down a few games, to stress and add extra stress on every pitch in a game, instead of going out and having fun and just playing the game the way you have throughout 162.”