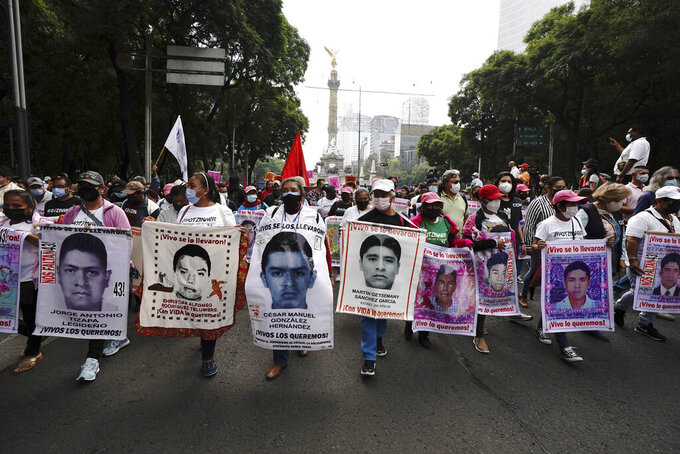 Marco Ugarte, ASSOCIATED PRESS
Supporters and relatives of the 43 missing university students hold placards with photos of their loved ones as they march on the seventh anniversary of their disappearance, in Mexico City, Sunday, Sept. 26, 2021. Relatives continue to demand justice for the Ayotzinapa students who were allegedly taken from the buses by the local police and handed over to a gang of drug traffickers. (AP Photo/Marco Ugarte)

MEXICO CITY (AP) — Several hundred students and political activists marched through downtown Mexico City on Sunday to demand authorities find out what happened to 43 teacher’s college students who disappeared in 2014.

Police in the southern city of Iguala handed the students over to drug gang members, who purportedly killed them and burned their bodies believing they were working for a rival crime group.

Marchers carrying photos of the youths chanted slogans like “Where are they?” They also held placards and banners reading “Until We Find Them!”

But seven years after the mass abduction on Sept. 26, 2014, real evidence of the students’ fate has been slow in coming.

Omar Gómez Trejo, the lead investigator in the case, said earlier this week that bone fragments found near a garbage dump near Iguala had been matched to three of the 43 students.

But unlike earlier investigations — now discredited because of allegations that suspects were tortured and evidence was mishandled — Gómez Trejo said the students' remains were likely scattered in several places and not all had been burned at the dump.

Forensic experts have rejected conclusions reached under a previous administration that almost all the students were killed and burned at the dump. Experts said there was no evidence of any fire at the site large enough to have incinerated the 43.

Gómez Trejo said some bone fragments were found at a site almost a half mile (800 meters) away, and some had not been burned.

“Many of them had not been exposed to fire, but rather were exposed to weathering,” he said.

Instead of there being one single site and method of disposal, Gómez Trejo said cooperating witnesses — some of whom took part in getting rid of the bodies — have described “various routes with various bags” full of remains.

Over seven years of investigations into the case, Mexican authorities have found dozens of clandestine graves and 184 other bodies, but have recovered only the three fragments of the missing students.