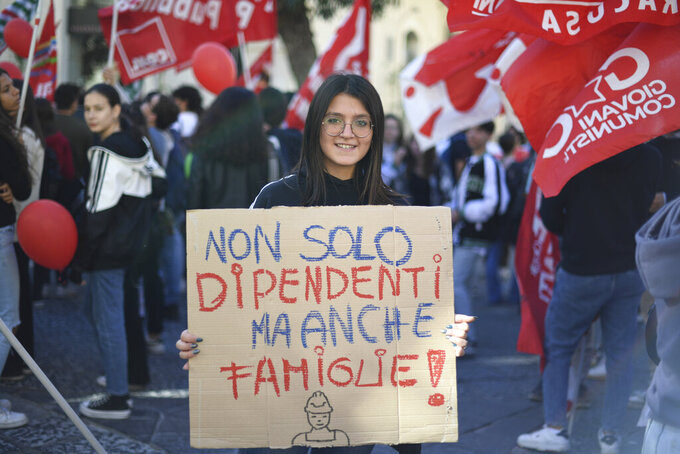 Salvatore Cavalli, ASSOCIATED PRESS
A demonstrator shows a placard reading "not only employees but also families" as she joins to a protest staged by the workers of Lukoil refinery in the Sicilian town of Ortigia, Italy, Friday, Nov. 18, 2022. The Lukoil refinery workers went on strike for an announced stop to production in December. (AP Photo/Salvatore Cavalli)

ORTIGIA, Sicily (AP) — Thousands of workers at a Russian-owned oil refinery in Sicily protested Friday against the threat of closure as Europe imposes a full embargo on Russian oil starting next month.

Workers demanded action from Italy’s new economic development minister, Alfonso Urso, who was meeting in Rome with union leaders and others to find a solution for the refinery that employs 3,500 people directly and indirectly supports another 6,500 jobs.

“Russian ships will stop on Dec. 5, given the embargo that the previous government decided,’’ union spokesman Luciano Spataro said in Sicily. "We hope that the new government will find a solution to avoid this catastrophe.’’

Urso told reporters in Rome that another meeting on the plant's future would be held before mid-December.

About 20% of Italy’s oil is refined at the ISAB Srl plant, which is owned by Russia’s Lukoil. The plant and related activities generate half of the gross domestic product in in Sicily’s Syracuse province and 8% of the region’s economic activity,

The refinery only has been able to process oil from Russia since the invasion of Ukraine because banks refused to take the risk of extending credit to buy non-Russian oil. Workers are demanding either the refinery's privatization or that the government’s export credit agency SACE act as a guarantor on future loans to buy oil from non-Russian sources.

“As soon as you break a link, the whole chain comes down,” said union leader Vera Carasi, “So, if Lukoil closes then we will have to close down the whole group of petrochemical businesses.”