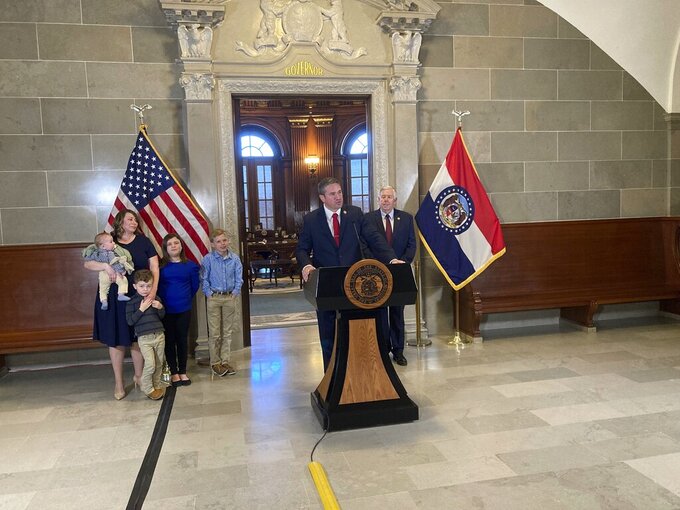 Parson has now chosen replacements for four vacant statewide elected seats, while no other governor has picked more than three. This is Parson’s second time naming a new attorney general, a coveted position often used as a launching pad for higher political office.

Bailey will replace Republican Eric Schmitt, who was elected to the U.S. Senate in November.

“The historical significance of this decision has not been lost on me,” Parson said Wednesday outside his Capitol office. “Few Missouri governors have had the opportunity and responsibility to appoint an attorney general on behalf of the people of Missouri once, let alone twice.”

Parson himself was not elected governor: As the then-lieutenant governor, he took the reins after Republican Eric Greitens resigned amid personal and political scandal. Voters elected Parson separately from Greitens in 2016. Parson then appointed his replacement, current Lt. Gov. Mike Kehoe.

And four years ago Parson appointed Schmitt, who had been serving as state treasurer since 2017, to replace Josh Hawley as attorney general when Hawley unseated former Democratic U.S. Sen. Claire McCaskill.

Parson at the time said he wanted to appoint someone who had already been “thoroughly vetted by the people of Missouri” through an election.

Parson then named Fitzpatrick, the former chairman of the state House Budget Committee, to fill the vacant treasurer's seat.

Parson on Wednesday said he will name a new treasurer “not too long in the future.” Fitzpatrick, as well as Schmitt, will be sworn in to their new positions as auditor and U.S. senator in January.

There's pressure on governors to avoided being seen as "using his or her political prowess to line the executive branch with political allies that are not qualified for the position,” University of Central Missouri political scientist Robynn Kuhlmann said in an email.

On the flip side, she said governors might make better choices and can fill seats quickly and without the expense of special elections.

“Sometimes, the outcomes of elections may not produce the most qualified candidate for the seat,” Kuhlmann said.

Missouri voters so far have sided with Parson, voting in 2020 to keep him, as well as Schmitt and Fitzpatrick, in office for full terms.

Parson's appointment likely will make it easier for Bailey, who has never held elected office, if he chooses to campaign as an incumbent to keep the attorney general's seat in 2024.

Parson praised Bailey's work sorting through hundreds of requests for shorter sentences and clean legal slates from Missouri convicts, which has been a top priority under Parson's administration.

Bailey served as the Governor's Office general counsel in 2021, when the office issued a news release calling a St. Louis Post-Dispatch reporter a “hacker" for informing the state of a significant data issue that left the teachers’ data vulnerable to public disclosure. The newspaper held off publishing a story about the flaw until the state fixed it.

Records show the state education commissioner initially planned to thank the newspaper for finding the problem, and a Missouri prosecutor declined to charge the journalist.

Bailey on Wednesday would not say if he stands by the accusations against the Post-Dispatch. “That issue has been resolved and put to bed," he said.