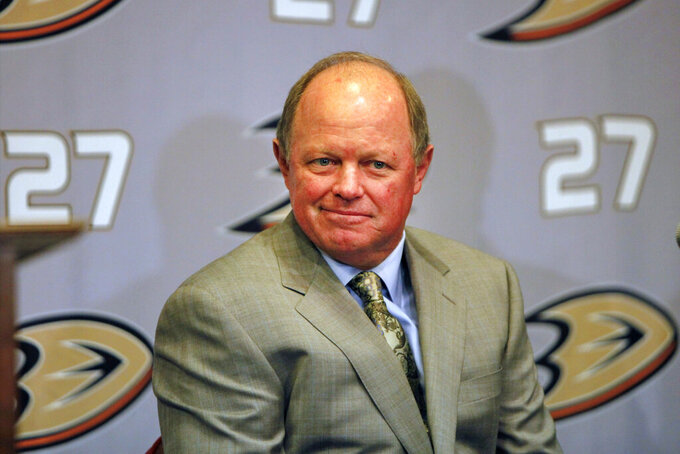 Damian Dovarganes, ASSOCIATED PRESS
FILE - Anaheim Ducks executive vice president and general manager Bob Murray listens during an NHL hockey news conference at the Honda Center in Anaheim, Calif., on June 22, 2010. The Ducks have placed Murray on leave Tuesday, Nov. 9, 2021, amid an ongoing investigation into his conduct. The team did not specify the behavior Murray is accused of. (AP Photo/Damian Dovarganes, File)

ANAHEIM, Calif. (AP) — Anaheim Ducks general manager Bob Murray resigned a day after he was placed on administrative leave amid an investigation into his workplace conduct.

Murray plans to enter a treatment program for alcohol abuse, the team and Murray said in a statement Wednesday.

The 66-year-old Murray has been with the organization since 2005 and has run its hockey operations since November 2008, the third-longest active tenure for a GM in the NHL.

A person with knowledge of the Ducks' front office told The Associated Press that the initial complaints against Murray prompting the investigation all involved verbal abuse of team employees. The person spoke on condition of anonymity because the team isn't disclosing details of its internal investigation, which is being conducted by law firm Sheppard Mullin.

“I want to apologize to anyone adversely affected by my behavior,” Murray said. “I vow to make changes to my life, starting with enrolling in a treatment program. ... As I step away from the Ducks, I will focus my attention on where it should be: improving my life for the betterment of my family and friends.”

Jeff Solomon, who joined the Ducks' front office in May, will be Anaheim's interim general manager while the club seeks a permanent replacement, the Samuelis said in a statement. Solomon, a longtime employee of the Los Angeles Kings and a former player agent, will be in charge until the conclusion of a “methodical, extensive” search, which could last until the offseason next summer.

The Samuelis said they “apologize on behalf of the organization to anyone affected by misconduct from Bob. We expect every member of our organization to be treated with respect and will not stand for abuse of any kind. ... While we do not condone his conduct, we fully support his efforts to improve his physical and mental health by asking for help.”

After Murray’s resignation, the NHL issued a statement saying the initial complaints against Murray were made to the league’s hotline, which was set up recent to make it easier to report abusive behavior.

“While we understand that (Murray) is seeking appropriate counseling and treatment for his personal issues, there is no excuse and there is no place in our league for the type of behavior that was recently reported through the NHL Hotline,” the league’s statement read. “We thank the Ducks organization for its prompt and appropriate response to hotline reports. The league and its clubs are committed to a safe and welcoming workplace across the NHL and will continue to take any and all action necessary to achieve that goal.”

The NHL has undergone a reckoning with professional conduct in recent years. The Blackhawks were fined $2 million last month for their handling of sexual assault allegations against then-assistant coach Brad Aldrich in 2010. A recent report on the scandal led to the resignation of Chicago general manager Stan Bowman and Florida coach Joel Quenneville, who was the Blackhawks’ coach when Kyle Beach said he was sexually assaulted by Aldrich.

Murray won the NHL’s Jim Gregory General Manager of the Year award in 2014, near the midway point of an impressive first decade in charge of the Ducks. He took over the job abruptly after former Ducks boss Brian Burke's resignation, but Murray built a consistent winner in Orange County, including teams that won five consecutive Pacific Division titles from 2013-17 and reached two Western Conference finals.

The last three Ducks teams missed the playoffs, and Murray installed himself as Anaheim's coach for the final 26 games of the 2018-19 season before returning to the front office.

Henry Samueli remained steadfastly behind Murray during the Ducks' recent struggles, and the current team is off to a solid start a 7-4-3 with a young new core of talent drafted by Murray's front office finally showing signs of blossoming. The Ducks have won five straight under third-year coach Dallas Eakins with their overtime victory in Vancouver on Tuesday night.

Murray is a native of Kingston, Ontario, who had a 15-year playing career with the Blackhawks before moving into Chicago's front office, eventually serving 2 1/2 years as their general manager. He was Burke's top lieutenant when the Ducks won their only Stanley Cup title in 2007.