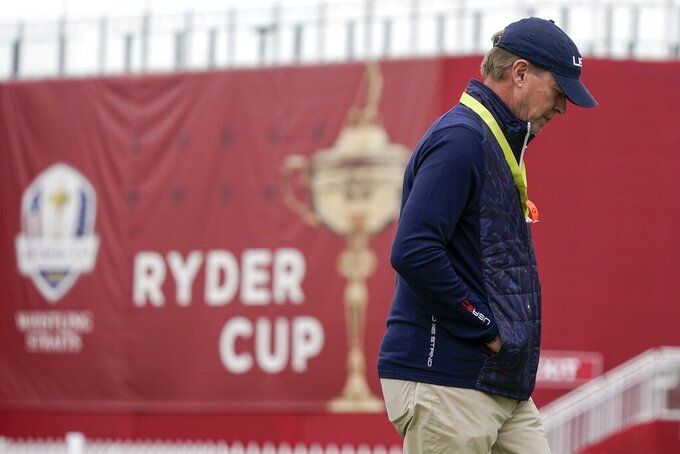 By The Associated Press (AP) — PGA OF AMERICA

Notes: While the Americans lead the series dating to 1927, Europe holds an 11-8-1 advantage since 1979 when the Britain & Ireland team was expanded to include continental Europe. ... The matches were postponed one year because of the pandemic. It now will switch back to odd-numbered years as it once was. ... The Americans have six Ryder Cup rookies, their most since 2008 when they won at Valhalla. ... Sergio Garcia has contributed 25 1/2 points, the most of any player in the Ryder Cup. ... This is the first Ryder Cup without Phil Mickelson playing since 1993. He is one of the assistant captains. ... Whistling Straits has held the PGA Championship three times, most recently in 2015. Americans finished runner-up in all three PGAs. ... Steve Stricker is the first Ryder Cup captain who previously served as Presidents Cup captain. ... The average age of the U.S. team is 29, making this its youngest team at a Ryder Cup.

Notes: The tournament is among the few 54-hole events on the LPGA Tour. ... Jin Young Ko picked up her second win of the season last week, her first LPGA appearance in six weeks following the Olympics. ... Nelly Korda, the No. 1 player in women's golf, is not playing for the second straight week. ... The field includes seven of the top 10 in the women's world ranking. ... Ko joined Korda as the only multiple winners on the LPGA Tour this season. ... Korda leads the LPGA Tour with three victories, and she is the only one to win back to back. ... The LPGA Tour heads to New Jersey for two weeks before an abbreviated Asian swing as its season heads toward a conclusion. ... Danielle Kang is in the field. She joins Korda as the only Americans among the top 10 in the world. This is her first appearance since the Solheim Cup. ... The tournament dates to 2008. Among past champions is Stacy Lewis, who graduated from the University of Arkansas. She is in the field this week.

Notes: Jim Furyk will not be back to defend his title because he is one of the assistant captains at the Ryder Cup. ... Spyglass Hill is being used this year instead of Poppy Hills. Spyglass also is part of the rotation for the AT&T Pebble Beach Pro-Am and is considered the toughest of the courses when the wind is not particularly strong. ... Furyk's lead in the Schwab Cup is under $10,000 over Jerry Kelly. ... Mario Tiziani, the brother-in-law of Steve Stricker, tied for 11th last week on a sponsor's exemption and narrowly missed out on getting into the field at Pebble Beach. He is at the Ryder Cup this week instead and says he might not have played, anyway. ... Participants from The First Tee selected from around the country are paired with players in this unique event that is being played for the 18th time. ... Kelly lost in a playoff at Pebble Beach last year to Furyk after closing with a 65. ... Ernie Els last year bogeyed the 18th to miss out on a playoff in his debut at the PGA Tour Champions event. Els was runner-up at Pebble in the 2000 U.S. Open to Tiger Woods by 15 shots. ... Among the past Pebble Beach Pro-Am winners in the field are Vijay Singh and Mark O'Meara, a five-time winner.