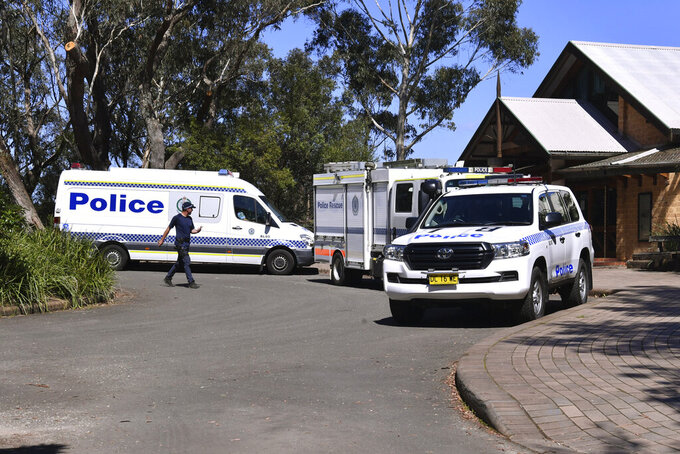 Dean Lewins, ASSOCIATED PRESS
Police work near the entrance to a walking track where a landslide killed 2 and injured two others is tapped off at Wentworth Falls in the Blue Mountains, west of Sydney, Tuesday, April 5, 2022. A British family of five was caught in a landslide while walking in Australia's Blue Mountains, and the father and 9-year-old son died. (Dean Lewins/AAP Image via AP)

SYDNEY (AP) — A British family of five was caught in a landslide while walking in Australia's Blue Mountains, and the father and 9-year-old son died. The mother and a teenage son were critically injured.

The landslide on a walking path at Wentworth Pass, a popular tourist destination in the mountains west of Sydney, was reported to emergency services about 1.40 p.m. Monday.

A 50-year-old woman and her 14-year-old son were winched by helicopter and taken to Sydney hospitals with significant head and abdominal injuries.

Paramedics walked the 15-year-old girl from the scene of the landslide, which is about 90 minutes from the site's parking lot. She was treated for shock.

A police helicopter on Tuesday winched the bodies of the younger boy and his 49-year-old father from the scene, emergency services said.

Police said the British family were on vacation.

The walking path the family was on includes scenic overlooks and leads to Wentworth Falls. Rains have caused landslides in the area, but the path had recently been inspected and judged to be safe.