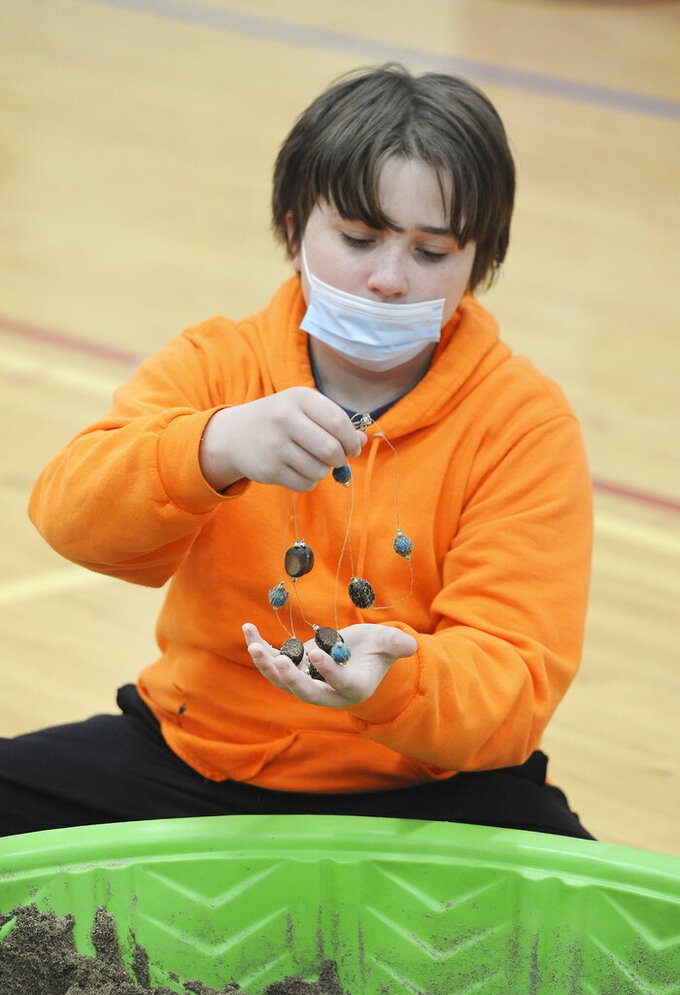 OWENSBORO, Ky. (AP) — The Southern Oaks Elementary School leadership and education team did not want students to miss out on an opportunity to learn about the indigenous people of the United States before celebrating Native American Heritage Day on Friday, Nov. 26.

That is why, along with learning about the Thanksgiving holiday and traditions, students participated in school-wide projects focused on and celebrating Native American culture. Each classroom took part in hands-on lessons about the indigenous populations that have lived, and continue to live, throughout the country. A culminating project took place in the gym, in which students learned about varying tribes, their customs and participated in an archaeological dig.

Mary Beth Durham, a retired American history teacher and Southern Oaks volunteer, led some of the programming in the gym. She told students about the natives of the eastern woodlands, Southeast, Great Plains, Southwest and coastal northwest regions of the U.S.

According to the Bureau of Indian Affairs, there are 574 indigenous tribes legally recognized in the U.S.

Durham said a common misconception she hears from students, or in pop culture, is that all natives used teepee home structures. In reality, mostly the Great Plains tribes used those because they were nomadic and often followed Buffalo trails.

“They used the hides of the animals to create the structure,” she said. “It also helped that they could pack those up quickly and move along if they needed to.”

She has also seen representations of varying native tribes sitting down with the Pilgrims for the first Thanksgiving dinner. She wants students to know that northeastern native tribes looked different than pacific northwest tribes.

“We want to bring this program to just teach students about the diversity among our Native American cultures,” she said.

Clay Durham, SOES assistant principal, said teachers in the school have been focused on providing fun learning experiences, what he referred to as the “elementary education experience.”

He said students remember those hands-on learning days, and in fact, many tend to be more engaged during those days than if they were sitting in a typical classroom chair and reading lessons on the same topic. With the pandemic, many educators haven’t been able to offer hands-on opportunities, so the entire school is focused on that this week.

Reice Coomes, 11, said she learned a lot from the activities in the gym. Specifically, she didn’t know before that tribes looked so different because they had to use what resources were immediately available to them.

“It’s been a good program,” she said. “I liked digging in the sand to find the artifacts, and it was just neat to learn about how many different tribes there are.”