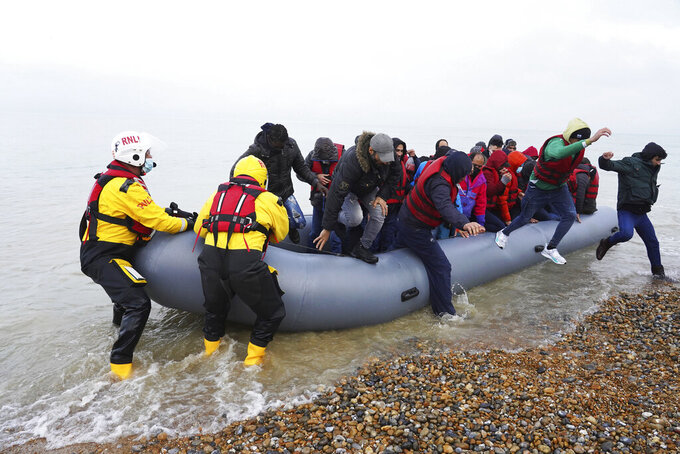 Gareth Fuller, ASSOCIATED PRESS
FILE - A group of people thought to be migrants are helped ashore by lifeboat crew members, after arriving on a dinghy at a beach in Dungeness, in south east England, Saturday, Nov. 20, 2021. A U.K. parliamentary committee on Wednesday Dec. 1, 2021, criticized government plans to deter migrants from trying to reach Britain in small boats, saying the measures will endanger lives without stopping dangerous journeys like the one that killed 27 people last week. (Gareth Fuller/PA via AP, File)

LONDON (AP) — A U.K. parliamentary committee on Wednesday criticized government plans to deter migrants and refugees from trying to reach Britain in small boats, saying the measures would endanger lives without stopping dangerous journeys across the English Channel like the one that killed 27 people last week.

British Prime Minister Boris Johnson has proposed legislation that would give authorities patrolling the Channel the power to turn away boats carrying migrants. The Nationality and Borders Bill would also make it more difficult for people who enter the country illegally to claim asylum and allow asylum-seekers to be screened abroad.

But the Joint Committee on Human Rights, a cross-party panel that includes members from both houses of Parliament, said Wednesday that “a policy of pushbacks” would probably conflict with international human rights law and maritime law.

“Pushbacks are known to endanger lives at sea,” the committee said in a report. “This is even more so when dealing with people on small, unseaworthy vessels, in a busy shipping lane, often with rough waters, without appropriate lifesaving equipment, as is the case for migrants in small boats in the Channel.”

An overcrowded inflatable boat sank on Nov. 24 in the waters between Britain and France, killing 27 people. A survivor of the deadliest migration accident ever recorded on the treacherous crossing said the passengers made emergency calls to both British and French authorities, but both sides told them to call the other.

More than 25,000 people have reached Britain on small boats this year, up from 8,500 in 2020 and just 300 in 2018, heaping pressure on Johnson and his Conservative government to intervene.

Johnson says the Nationality and Borders Bill now making its way through Parliament would undercut the business model of people smugglers who charge thousands of pounds (dollars) to arrange cross-Channel voyages.

Tom Pursglove, the British minister responsible for tackling illegal immigration, rejected the idea that the government proposals violate international law. He said the government is seeking to prevent deaths at sea and to put criminal gangs out of business.

“I think what we saw last week is a dreadful tragedy. It is unthinkable,″ Pursglove testified before the committee. “The thought that women and children and men lost their lives in this way is horrendous. And for me, that only stiffens my resolve to work as hard as I possibly can to play my part, to render the route unviable, with the ultimate objective in my mind of preserving life.”

One survivor of last week’s disaster, Mohammed Ibrahim Zada, a Kurdish migrant from Iran, told Kurdish media network Rudaw that both France and Britain ignored the passengers' pleas for help when their boat began taking on water.

British officials denied ignoring mayday appeals, saying they responded to every call received on the day the 27 people died. Dan O’Mahoney, Britain’s clandestine channel threat commander, told the committee on Wednesday there were multiple migrant boats in the water on the day of the sinking.

“I can’t tell you with any certainty whether we definitely received a call from that boat or not,” he said, adding that the coast guard was attempting to find out.

“The French authorities alerted us to the presence of that boat … at which point it was well within French territorial waters,” O’Mahoney said. “It may never be possible to say with absolute accuracy whether that boat was in U.K. waters or French waters prior to that.”

The French maritime agency also expressed surprise and dismay at the survivor accounts, saying the agency issued an immediate mayday relay call to all boats in the area as soon as it heard about the sinking boat from a nearby fishing vessel.

The agency spokesperson also dismissed the notion that authorities passed the buck, insisting that French and British authorities cooperate all the time to help vessels experiencing trouble of various kinds in the English Channel.

“We work together almost daily,” including on joint operations in each others’ waters, the spokesperson said. “We have no difficulty in coordination.”

The British government’s borders bill also proposes to treat asylum-seekers who sneak into Britain more harshly than those who use the few authorized routes for refugees. The human rights committee said that is inconsistent with the U.N. Refugee Convention, which “explicitly prohibits refugees being penalized for unauthorized entry.”

“Current failures in the immigration and asylum system cannot be remedied by harsher penalties and more dangerous enforcement action,” she said.

Follow all AP stories on global migration at https://apnews.com/hub/migration.