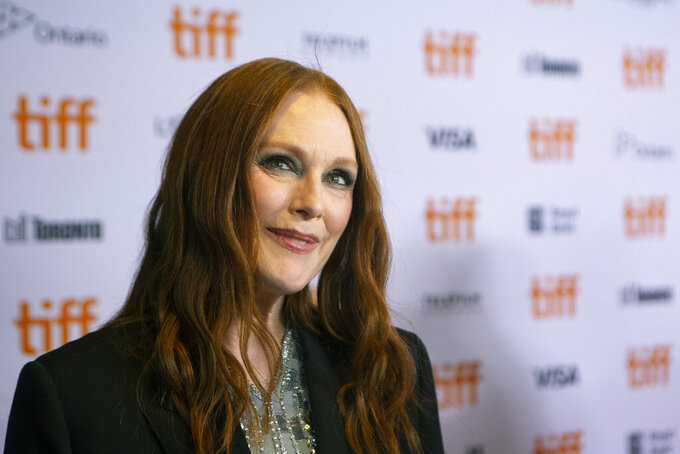 NEW YORK (AP) — Millions of people will get a chance to get to know the shy, teenager Evan Hansen this month, but Ben Platt is waving farewell.

The actor and singer is intimately intertwined with Evan, originating the role in 2015 and eventually leading the stage musical “Dear Evan Hansen” to its world debut in Washington, D.C. He soon took Evan off-Broadway, then to Broadway and Grammy triumphs. He is now unveiling the character on film, a final pairing.

“I really was very grateful and very privileged to have the opportunity to get back in and say one final goodbye," says Platt. “I’ve grown to love him and care for him so much because he’s obviously changed kind of everything about my life.”

Under Stephen Chbosky's direction, the movie is not a filmed version of the stage musical but a full cinematic rethinking, with new musical numbers and the development of a minor character in the musical into a full and complex young woman.

“I think the best movie musicals that I love use the film as an opportunity to improve upon and elaborate on certain elements of the musical that are left unfinished or that still have room for improvement,” says Platt.

Alongside Platt is a whole new cast — Julianne Moore, Kaitlyn Dever, Amy Adams, Amandla Stenberg, Nik Dodani, Colton Ryan and Danny Pino. Steven Levenson adapted the script from his original stage version. Platt is the only actor to make the leap from stage to screen, angering some in the theater community.

“Dear Evan Hansen” centers on the awkward Evan who inadvertently becomes a social media sensation, with disastrous consequences. A lie about being the best friend of a dead classmate earns him popularity and a girlfriend, but the falsehood is ultimately corrupting.

It captures the strains between children and their parents, as well as exploring suicide, alienation and peer pressure. It’s central paradox — why do people feel so alone in a world that’s so connected? — is a timely message as the nation grapples with COVID-19 isolation.

“We’ve all been through this horrible ordeal. It has left scars on our societies and on our psyches. And I think that ‘Dear Evan Hansen’ is part of the solution to help us heal and help us find some hope that we desperately not only need, but quite frankly, deserve,” says Chbosky.

The songs by Benj Pasek and Justin Paul include the iconic anthem “You Will Be Found,” “Waving Through a Window,” “For Forever” and “Words Fail,” but some didn't make the transfer to film.

The stage version, for example, opens with the show's two moms singing “Anybody Have a Map?” but the new film roars out the gate with “Waving Through a Window” with Evan in his bedroom.

Chbosky explains that “Waving Through a Window” was necessary to start the film because it's told from Evan's point of view and instantly ground the film in his head. “As much as it was hard to slay that darling, it opened up the whole movie,” he says. Fans will still hear “Anybody Have a Map?” if they pay attention: Evan's high school marching band plays the song in the opening sequence, a sweet little Easter egg.

The film “Dear Evan Hansen” is in keeping with the intimate nature of the stage version, which Chbosky calls “a small-m musical” and “more like a drama with songs.” In this version, the songs become thoughts in the characters' heads and no one lets on that they're actually singing or that anyone in the scene is singing.

The filmmakers have taken the opportunity to expand the role and give a song to Alana, a hyper-organized friend of Evan's (played by Stenberg) who confesses she shares a lot of his anxieties and that many more people than he realizes do, too. There's also a revised ending showing more of Evan's repentance.

But one thing that was never up for debate was tapping Platt to play Evan again. Despite some online snark over his age — he turns 28 this month — Platt stunned the director with a performance he calls the “stuff of legend.”

“See the movie,” says Chbosky. “If by the end of the movie you still feel that way, well, OK. I might shell a couple of bucks for some therapy out of kindness. But the vast, vast, vast, vast, vast majority of people, once they see the movie and they see what he can do, it’s like, ‘Who else can play it?’ Nobody. Literally nobody. He is Evan Hansen.”

Filming was made more challenging by COVID-19 protocols, but Platt thinks the isolation and dread that the pandemic triggered was seized on by the cast.

“The one silver lining of the absolute horror of the pandemic was that we already were really very much in that emotional headspace,” he says. “As difficult and sort of lonely as that made the experience, I think that it really added to the integrity and the authenticity of the feeling of the film.”