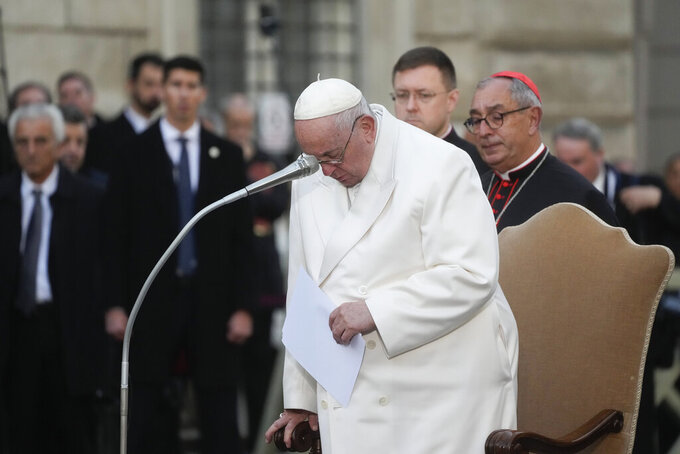 Gregorio Borgia, ASSOCIATED PRESS
Pope Francis becomes emotional during his prayer in front of the statue of the Virgin Mary, on the occasion of the Immaculate Conception feast in Rome, Thursday, Dec. 8, 2022. (AP Photo/Gregorio Borgia)

ROME (AP) — Pope Francis wept Thursday in the center of Rome as he prayed for peace in Ukraine during an annual Christmas visit to venerate a statue of the Virgin Mary near the Spanish Steps.

Francis leaned over and choked up, unable to speak precisely as he arrived at the part of the prayer where he said: “I would have liked to have brought you the thanks of the Ukrainian people …”

As the crowd of thousands of dignitaries, clergy and ordinary Romans realized that the pope was overcome with emotion, they broke into applause and encouraged him to continue.

After a long pause, Francis continued the prayer, picking up from where he left off: “… the Ukrainian people for the peace we have so long asked the Lord. Instead I must present you with the pleas of children, elderly, mothers and fathers and the young people of that martyred land, that is suffering so much.”

The moment came during the pope’s annual visit to the Spanish Steps, which falls on the Dec. 8 feast day dedicated to Mary, the mother of Jesus. The event marks the unofficial start of the Christmas season in Italy.